The French Ambassador to Ireland, H.E. Stéphane Crouzat joined Councillor John O’Leary, Deputy Mayor of Waterford, President of WIT, Professor Willie Donnelly along with local teachers of French, restaurateurs and many food producers from the region for a celebration of the very best in French and Irish cuisine at WIT on 10 April 2019.

Guests enjoyed a meal which showcased locally produced artisan food and French wines prepared and served by 2nd year students form the Higher Certificate in Culinary Arts under the direction of Chef and programme leader, Edward Hayden and lecturer Nuala Gordon. The celebration marked the annual ‘Good France/Goût de France’ day supported by French Chef Alain Ducasse and the French Ministry for Europe and Foreign Affairs, ‘Good France’ aims to celebrate the diversity of world gastronomy and its links with French cuisine.

Shared unique tradition that is the Waterford blaa

Speaking after the ‘Good France’ event, Ambassador Crouzat commented that ‘Waterford and France share a unique tradition as illustrated by the history of the Waterford Blaa, a notable Irish bread that is said to have been introduced by the Huguenots in the 17th century."

He added that he was delighted to see Waterford Institute of Technology, a keen supporter of the Good France initiative over the years and last year’s winner of the Dairy Chef competition, participating again this year in this celebration of Franco-Irish gastronomy. "I thoroughly enjoyed discovering the work of Irish and international WIT students on such diverse aspects of culinary arts including food sustainability and oenology. I was also impressed to see how the institute engages with the local community from restaurants to schools showcasing, for example, outstanding local talents in dance and singing."

WIT President Professor Willie Donnelly added, "our links with France go back many years and we are honoured to welcome H.E. Ambassador Stéphane Crouzat to WIT to celebrate that connection. We are particularly delighted to host this evening's 'Goût de France/Good France’ event in association with the French Embassy as our links with France are extremely important to us. We have inter-university collaborations with many of France’s leading universities, a joint Masters programme in Business with Brest Business School, an Erasmus+ exchange network with over 25 French partner institutions and several research partnerships in different parts of France".

Commenting on WIT's links with France in the area of culinary arts, Head of the School of Humanities, Dr Suzanne Denieffe remarked that "we are particularly pleased to further develop our cooperation with the French Embassy through the 'Goût de France’ event." Referring in particular to the growing number of international opportunities available for students on the BA (Hons) Culinary Arts programme, Dr Denieffe added that "our students in the area of Culinary Arts are very fortunate to have excellent opportunities for work placement and study all over the world as an integral part of their programme. Our students can also spend time studying and on work placement in France and we are delighted to cooperate with some of France’s leading institutions in the areas of Culinary Arts and Hospitality including the University of Angers and the world renowned Institut Paul Bocuse in Lyon".

WIT’s increased cooperation with France was also highlighted by Ray Cullen, Head of Department of Languages, Tourism and Hospitality, who referred to the Institute’s collaboration with the French Embassy to organise the National Dairy Chef competition, an exciting initiative with the National Dairy Council (NDC) and the French Dairy Council (Cniel). "The competition brings together culinary students from the leading colleges in France and Ireland to work together to champion their respective institutions by creating a three-course menu celebrating Irish and/or French dairy produce. We are especially proud that WIT student, Hope Cuddihy (4th year BA (Hons) Culinary Arts) paired with a student from the University of Cergy-Pontoise was runner-up in this year’s event which took place in Paris last week," he said. 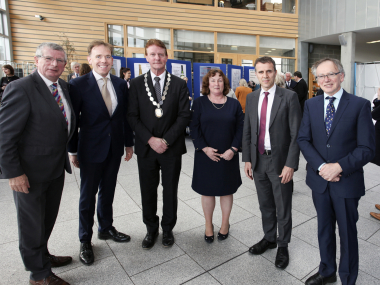