The HEA has announced that ahead of the CAO change-of-mind deadline of 1 July, that students and parents consider the strong employment opportunities in Computer Science and ICT.

WIT final year students, on the BSc (Hons) in Computer Forensics and Security, for example often have contracts signed by February for jobs on finishing their course. The new BSc (Hons) in the Internet of Things which started in September 2016 will prepare graduates for careers at the cutting edge of the future of technology. The range of courses open to undergraduates include: BSc (Hons) in Applied Computing, BSc (Hons) in Entertainment Systems, BSc in Software Systems Development, BSc in Information Technology and BSc in Multimedia Applications Development.

WIT’s School of Science & Computing offers a wide range of Level 7 and 8 computing courses. Last year WIT invested a six figure sum into new labs and facilities using a portion of the dividends WIT earned from the sale of the spin out of TSSG spin-out company FeedHenry which sold in 2014 for €63.5m.

Tom Boland, CEO of the HEA, said: “I urge students to consider the strong employment opportunities in Computer Science and ICT, particularly as graduates in that area report high levels of employment and pay. It is an area of continuing growth with Ireland facing an average increase in demand for high-level ICT skills of around 5 per cent a year to 2018.”

He also urged young women to consider computing courses. “Traditionally, young men have pursued careers in ICT, but these exciting and rewarding careers are very much open to young women too where they will find an enthusiastic response from employers.  Since 2009, women account for between 13 and 15 per cent of enrolments in ICT courses in year one. Given the excellent career prospects and their undoubted ability, young women should buck that trend and take up one of the many fantastic ICT courses available in higher education Institutions throughout Ireland when completing their ‘change-of-mind’ form this week.”

WIT gives students a chance to try IT

In recent times WIT has been giving secondary school students and visitors to the open days and evening a chance to try out coding.

In May 2016 lecturers from the Department of Computing and Mathematics in WIT visited the Presentation Secondary School in Waterford City to run the Hour of Code, a one-hour introduction to computer science, designed to demystify coding and to show that anybody can learn the basics of programming.

Speaking at that event WIT lecturer Dr Siobhan Drohan said: “Worldwide, there are not enough technology graduates to fill the job openings. In the Irish technology sector, there are approximately 7,000 current vacancies and in continental Europe, there are a staggering 700,000 positions that remain unfilled. This skills shortage comes when a computing graduates starting salary is in the region of €30,000 or more.”

What do graduates do? report

In its recent publication ‘What do graduates do?’, the HEA provided insights into the lives of ICT graduates of Irish universities and colleges of education, nine months after graduation.  Key findings included:

What to do next?

Ask a question on the page of the course you are interested in.

Ask questions by phone, in person or on our live chat as part of our ASK WIT initiative in the run up to 1 July. See the www.wit.ie home page for full details. 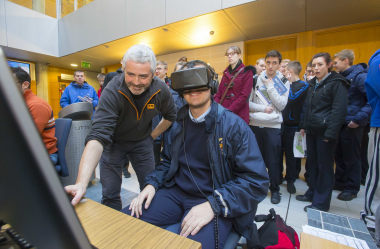