‘The High Hopes Choir’ is the culmination of Ireland’s first homeless choir recording and releasing  the track “High Hopes”  for some of the most recognized homeless charities in Ireland Dublin Simon Community, St. Vincent de Paul and Focus Ireland.

Led musically by David Brophy the single is part of a brand new TV series for RTÉ One due to be aired this December. This ambitious performance-based project involves two regional choirs in Dublin and Waterford made up of people affected by homelessness and the staff and volunteers who work with them. "In just 8 weeks, through 20 rehearsals and over 1200 cups of tea and coffee, more than 60 people, all dealing with Ireland's homeless crisis, reach beyond the stars.” explains David Brophy. “Hear their collective voice through this disarmingly honest interpretation of Kodaline's 'High Hopes', accompanied by the RTÉ Concert Orchestra, and support their attempt to give hope, inspiration and a voice to the entire homeless community in Ireland."

The charity single was recorded after receiving some encouragement and vocal advice from chart-topper Ed Sheeran. Former Westlife star Shane Filan and The Voice of Ireland’s judge Bressie.

Dublin Simon Community, Focus Ireland and St. Vincent de Paul explains “We are honoured to be part of the High Hopes Choir. We would like to congratulate our clients, staff and volunteers and everyone involved in this outstanding achievement, it is truly inspiring to see how far the choir has come.  As we support people, it is our pleasure to help people rediscover themselves and their talents, re-engaging who they were before life’s struggles left them without an identity and a place to call home.

Initiatives such as this choir provide people with the direction and knowledge they need, and for some, re-ignite passions that they had long forgotten. It has brought great joy to all the participants and will have a life-long impact.”

‘The High Hopes Choir’ aims to help change the public perception of what it means to be homeless in Ireland today, as well as raising funds to support the services and facilities which play a vital part in ending the cycle of homelessness.

90 cent from each download will be split equally between Dublin Simon Community, St. Vincent de Paul and Focus Ireland.

You can watch the Late Late Show performance here. 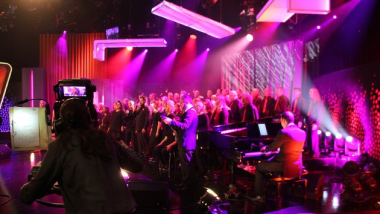