Research students in Ireland are being offered an opportunity to showcase their exciting work and share in a prize fund worth more than €5,000.

The annual 'Making an Impact' competition, sponsored by the Irish Independent and the Higher Education Authority (HEA), invites students registered on a postgraduate, masters or doctoral programme - in any discipline - to share their research.

The objective of the competition, which supports the recently launched #LoveIrishResearch initiative aimed at highlighting the achievements of Irish researchers, is the effective communication of their work to a lay audience.

Entrants should explain why what they are doing matters to Irish society, or internationally, and consider how they would outline its impact to somebody who knows little or nothing about the topic.

Submissions, which may be written (no more than 800 words) or audio-visual (no more than eight minutes), should be emailed to [email protected] before 5pm on March 4, 2016. The entry may be on behalf of a team of researchers, but if a team is selected as a finalist, only one student may make a presentation at the final.

An independent panel will draw up a shortlist of five who will be invited to the final, a public event at The Helix, DCU, on April 19, 2016. The finalists will have a maximum of 10 minutes each to make a presentation, followed by a brief question-and-answer session with an expert panel. As well as the panel, there will be an audience of second-level students.

There will be two awards of €2,500, one decided by the panel and the other based on an audience vote.

Winning research will be profiled by the Irish Independent. Unsuccessful finalists will receive a €100 book voucher.

Since its launch in 2009, 'Making an Impact' has attracted a huge variety of submissions and last year's winning entries were on topics as diverse as ultra-high-performance reinforced concrete and the role of omega-3 from algae in gut and brain health.

Past winners of the award from WIT include Dr Roisin O’Shea, mediator. 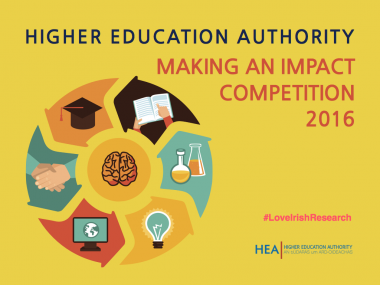