Gold, silver and bronze, WIT students across a number of Hospitality, Culinary Arts and Restaurant Management courses bring home a selection of medals

Students across a range of Hospitality, Culinary Arts and Restaurant Management courses at WIT had a successful few days at CATEX, Ireland’s largest food service and hospitality exhibition held in the RDS, Dublin.

CATEX 2017 kicked off three days at Ireland’s largest foodservice trade event, with a host of competitions and tournaments dominating the show including the Chef Ireland Culinary Competitions 2017 and The Bartenders Association’s Irish Cocktail Championships.

Over the three-days, WIT students won one gold medal, five silver medals and seven bronze medals and all other participating students brought home certificates of excellence.

On Tuesday, two teams from WIT participated in the Cook Serve competition, with both teams finishing in the medals. This competition consisted of a team of two chefs cooking a meal for six guests which was served in the restaurant live at Catex 2017.

The first WIT was led by Luke Mcleod, Lead Chef, who is currently working as a chef in the Bay Tree Bistro in Waterford who worked alongside Sarah Kehoe, Sous Chef; the third member of the team was Kathlyn Leahy, a student on the BA (Hons) in Hospitality Management who organised the setup and service of the guests. The team finished second in the competition with their menu which consisted of Flambé of Prawns, Apple, Pernod and Rocket to start. This was followed with their Hay smoked Duck dish with Carrot and Orange and finished with Lemon, Thyme, Black Pepper and Raspberry.

The second WIT team was led by Lorna Rochford as Lead Chef, who is working as Chef de Partie in Monart, Co Wexford and is a student of Restaurant Management. Lorna worked alongside Sous Chef Laura Harrington with Jamie Condon, Dooley’s Hotel, the Quay Waterford, a student of the Restaurant Management. Their themed menu of ‘Sea and Farm’ to fork saw them awarded third place bronze.

Martha Schaumkessel, pastry chef in Athenaeum House Hotel and Rita Bruzgaite, pastry chef in Castle Durrow, Co. Laois, who are both studying WIT’s participated in the Mystery Basket, a competition in which the competitors receive their ingredients 30 minutes prior to the commencement of the competition. They must then design a menu and cook this before a panel of culinary judges from around the world. Their menu of a fish starter, chicken mains followed by a lemon posset saw them awarded the bronze medals.

In the senior Open Duck competition, Conor Nolan, a student of the New BA (Hons) in Culinary Arts, finished third out of 20 competitors and was awarded a bronze medal.

Thursday saw Rita Bruzgaite taking to the stage again bringing home a silver and bronze medal for her efforts.

WIT students were 4 of the 10 representatives that went to Dublin from Waterford to show off their cocktail training and skills at the competition. BAI held the overall National Cocktail Championships at CATEX 2017 for the tenth year. The championship is sponsored by Edward Dillion & Co, Ltd.

There were two medal winners for WIT in this competition. Kathlyn Leahy from Kilkenny won a silver medal, while Alex Waleska, a BA (Hons) Hospitality Management student won the overall National Hospitality Student Cocktail Challenge by taking the gold! 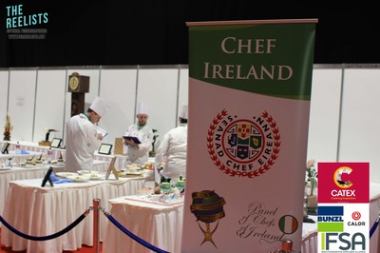