How jockeys cope with a tough and demanding sport

Reported to be worth over €1.8 billion to the Irish economy, Irish horse racing and breeding is a world leader. The jockeys participating compete in a unique sport that is renowned for its tough and demanding nature. A combination of modesty and resilience in jockeys has resulted in the industry under appreciating them in the face of extraordinary psychological and physiological demands.

A research team in Waterford Institute of Technology (WIT) in conjunction with the University of Limerick are currently investigating the mental health, bone health and physiology of the jockey in three different projects. Ahead of the next week's Cheltenham Festival and the annual mainstream focus on the sport, here's a summary of the research and its implications.

To begin, mental health in elite sport has gained greater attention in recent years with high profile athletes such as Kevin Love and Michael Phelps publicly disclosing their battles with depression. In horseracing, jockeys Mark Enright and Kieren Fallon have also shared their experiences with mental illness.

Academic studies suggest that athletes experience mental health issues at a similar incidence rate to the general population. However, athletes are subject to intense physical, psychological and emotional demands which may increase the likelihood of developing a mental health condition. Previous research in Ireland has found that over 50% of jockeys met the criteria for depression. Whilst these symptoms were self-reported and therefore not clinically diagnosed, it’s an alarming finding and indicative of sub-optimal mental health.

Understanding factors that may contribute to mental ill-health is key. As such, a recent study carried out by Lewis King as part of a PhD scholarship funded by the Irish Horse Racing Regulatory Board (IHRB) has sought to identify sources of stress to jockeys and, unsurprisingly, difficulty managing weight was voiced by most jockeys. It appears that managing weight can consume a jockey’s life, negatively affecting social events and relationships.

Jockeys also frequently discussed the workload they face. With a loose season structure promoting long competitive seasons, jockeys tend to be working all year round, travelling vast distances daily. External pressures such as constant perceived scrutiny from trainers, owners and the public, in addition to the rise of social media abuse, make it an extremely challenging workplace. It is hoped the findings in this area will help inform bespoke support programmes for jockeys to help improve their psychological wellbeing and athletic performance.

From RTÉ 2fm's Game On's focus on the Jump Girls documentary, jockey Katie O'Farrell and director Luke McManus, join Damien O'Meara to discuss the documentary, life as a jockey and women in racing

The level of athleticism jockeys possess is often unbeknown to them. The physiological data recently collected in National Hunt racing by Mikey Kiely (and funded through IHRB and the Irish Research Council) has unveiled that jockeys are experiencing heart rate peaks above 90% of their maximum heart rate. Understandably these peaks are seen in the final furlongs where jockeys are pushing out in competitive finishes.

When we compare the data obtained to field sports such as Gaelic games or soccer, we see similar peak heart rate values are reported with the jockey experiencing higher average heart rate values. Although these pitch-based athletes experience longer game durations, jockeys can ride in multiple races in a day and several days a week with no established off-season. Furthermore, jockeys are required to ride at low weights, often in a dehydrated state, whilst trying to maximise athletic performance of both themselves and the horse.  Gaining an understanding of these demands can inform training guidelines to ensure jockeys are training optimally to manage weight and to allow them to perform maximally on each horse in each race…

Early mornings and travelling long distances for racing, in addition to limited food intake and strict weight restrictions, presents a number of unique health and performance issues for jockeys including increased risk of bone fractures. Bone health is of particular interest as it can become compromised when the body is given insufficient energy for growth and development. This is specifically relevant at the early to late teen life cycle when bone formation is most prolific. Jockeys in their teenage years are at a greater risk of bone fractures and career ending injuries as a result of the restrictive energy intake required to maintain a low body mass.

From RTÉ Archives, an Ireland's Eye report from December 1982 on apprentice jockeys training at The Curragh

Arthur Dunne is investigating bone health in jockeys as part of his PhD funded through WIT and Irish Injured Jockeys. The research to date would suggest that jockeys are achieving the necessary guidelines for bone density, albeit to the minimum standard as a consequence of limited energy availability or in other words an inadequate energy intake for growth and other essential bodily functions. It must be noted that numerous other factors including genetics, exercise history and previous fracture incidents all contribute to healthy bones alongside diet.

Fortunately for jockeys in Ireland, there is a supportive performance pathway (The Jockey Pathway) in operation funded through Horse Racing Ireland that was developed as a result of the years of research completed by the IHRB Jockey Research Group on jockeys' health and performance. Its primary goal is to ensure that all jockeys have access to a professional support system in terms of sports psychology support, strength and conditioning, and a sports dietitian which will enable them to achieve the highest standards and prolong their careers in racing. The current research being conducted directly feeds into these services to ensure evidence-based practice and support is provided to these athletes in Ireland. 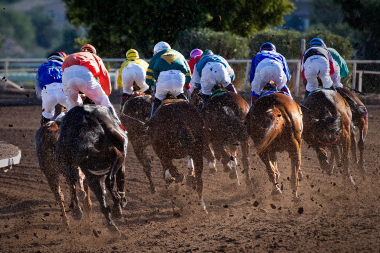 A research team in Waterford Institute of Technology (WIT) in conjunction with the University of Limerick are currently investigating the mental health, bone health and physiology of the jockey in three different projects. Phot: Photo by Gene Devine on Unsplash