In the News: Architecture graduate works on Premier League project

My spur to new heights

When Tottenham Hotspur’s Premier League endeavours last season ended with an implosion of sorts, manager Mauricio Pochettino questioned the mentality of his players.

For much of the season, they had held the Premiership within their grasp, but after losing out to Leicester’s fairytale success, they fell apart with a 5-1 defeat to relegated Newcastle United. Pochettino will have spent the summer pondering over the last game of the season, but he will look to rebuild the team’s confidence when pre-season matches start in July.

One thing that could help in the players’ rehabilitation is Tottenham’s new private lodge, which is being built alongside a new state of the art training centre in Enfield, north London. The 45-bedroom, architect-designed facility will act as a home from home for Spurs’ first-team and academy players.

The club drafted in one of London’s top architectural firms, F3, to create a “controlled, consistent and familiar environment”.

F3 had worked with Tottenham previously on corporate and executive hospitality suites at White Hart Lane and is the club’s architectural collaborator.

A little known fact, though, is that the man leading the project is an Irishman, Cillian Twohig. The 30-year-old from Cork is a graduate of the Cork and Waterford institutes of technology. He completed a thesis at the Waterford Institute of Technology’s Department of Architecture in 2013, and with few jobs in the industry in Ireland, moved to Germany until the bright lights of London called.

“I was attracted to London as it is, in my eyes, the centre for architectural innovation,” says Twohig. The lodge is his first “sports-type” project, but he says he does not see it as exclusively related to sport, as it encompasses a range of building types.

The brief for Twohig and his team was to design a world-class rest and recovery facility to Kane, Eric Dier and Mousa Dembélé.

Twohig says they saw the farm buildings as the ideal space to create a sense of home. “Given that most of our client’s players are international, we decided that this space was about offering a relaxing place they could call home. These players are used to staying in hotels around the world. This facility exists as a professional working environment with a focus on relaxation and recovery.”

Spaces have been designed so that players can eat and relax together like a family, says Twohig. However, not even the best team mates can spend all of their time together, so consideration was given to planning the players’ individual spaces. “Rehabilitation is key and the complex has been designed to complement their training schedule,” says Twohig.

Every nook and cranny of the Lodge has been planned with the precision of Wes Hoolahan’s cross to Robbie Brady against Italy. “We chose a soft neutral palette for the sleeping areas, in comparison to the brighter living areas.”

Imitation is the best form of flattery, and since Spurs announced its plans for the Lodge, other Premiership teams have been making moves to create similar facilities. The club has been tightly guarding images of the site. Twohig and his team did undertake several international benchmark appraisals to ensure they were creating something top-notch.

Construction recently started, and is to be complete within two years. But if all goes to plan, Tottenham will have walked away with the Premiership trophy long before the players ever lay their heads on the Lodge’s luxury pillows.

“We are all very excited to see it develop into reality. I have been blessed to have had such dedicated colleagues to work with; we share a sense of excitement that we are creating a unique facility,” says Twohig. 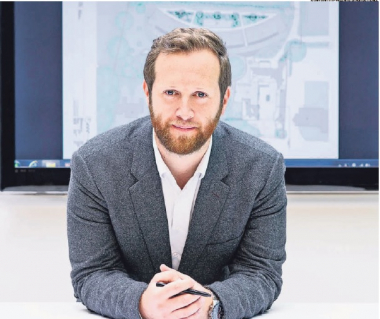 Waterford Institute of Technology graduate Cillian Twohig has led his team in the designof a luxurious rest and recovery facility for Premier League team, Tottenham HotSpur. (Photo Courtesy of the Sunday Times)