In the news: Sophie O’Sullivan following in her mother’s running shoes

Coinciding with the anniversary of Sonia O’Sullivan's Olympic medal win, WIT's Dr Cíara Losty finds out if the genes we inherit really matter in sport

Dr Ciara Losty, a lecturer in applied sport and exercise psychology at Waterford Institute of Technology, was interviewed for an article in the Irish Times. The article discusses if the genes we inherit really matter in our ability to succeed in sport. Sonia O’Sullivan’s youngest daughter, Sophie O’Sullivan, hit the headlines in July when she was crowned the under-17 1,500m national champion – the same title her mother won 32 years earlier.

Dr Ciara Losty, said that it’s helpful that Sophie isn’t concerned about her mother’s success. “It’s really positive that Sophie doesn’t really consider what her mother achieved, this is Sophie’s athletic journey and “doing her own thing” sounds like really sensible practice from a 16-year-old athlete,” she says. Sonia O’Sullivan and husband Nic keep the parenting and coaching separate, trusting Sophie’s trainer at school to lead her in the right direction, something Dr Losty advises for other sporting parents. “One key suggestion for sensible successful sporting parents is to remember that they are a parent first, not a coach. When a parent – successful in sports or not – starts doling out coaching advice, they are blurring the lines, depriving the child of a parent and adding one too many coaches to the pool,” she says.

“From my experience, elite athletes will often talk about hard work, graft and the commitment they had to put into their sport to separate themselves from other athletes like them. “It’s often other parents, coaches and journalists who seek out comparisons and add pressure on the successful child athlete. “As a parent, it’s part of your role to keep things in balance and things in perspective for your child, and when appropriate maybe share experiences when they found it tough in their sport or failed in their sport. Parents can further assist skill development by encouraging their children to think about what skills they are gaining from sport and not emphasising winning and losing, but chatting about their child’s experience.”

Dr Losty adds that parents should reassure their child that their support, emotional and tangible, will be there for them when they need it. She also warns against using labels. “As a parent, be careful about using descriptors and labels like, ‘There goes our little winner’, that emphasise only part of your child’s identity. They are not always winners, and they certainly don’t always lose,” she says. “Your children are only athletes some of the time. However, they can still compete in everything they do. They can compete in academics, paying attention, music practice and playing sports. Emphasise that competing means competing against yourself, not anyone else.

“Sports are about winning, but they’re also about losing, learning and getting better. No one likes losing, but it isn’t fatal. We help build our children’s mental toughness by allowing them to experience setbacks and deal with adversity. Too often, as parents, we try to make it better. If we try to remove their ownership by blaming anyone else, we give an out, an excuse.”

Read the full article in the Irish Times 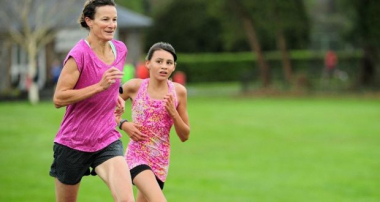