In the news: Will Brexit open the door to a united Ireland?

Lecturer in Law Dr Jennifer Kavanagh, explains in The Sun how a game of political ping pong in Westminster could open the door to a united Ireland

THERE are few people now unfamiliar with Brexit, the seemingly unending process of the UK leaving the EU. For many in the UK, it was based on promises written on the side of a bus.

These promises were believed by a majority of voters, many of whom are now shocked to realise that buses may not be the best source of political analysis.

For the majority of us in Ireland, we tuned out once we had our fun annoying the DUP over the border issue and had secured the backstop agreement. However, it does pose serious problems for anyone that does business with the UK and especially Northern Ireland. The lack of a plan, never mind a deal, is a constant worry.

And Brexit came rushing back into the headlines this week for two reasons. Firstly, the House of Commons was voting on amendments to the legislation to leave the EU. Secondly, two polls were released on whether Brexit was a convincing enough reason for Northern Ireland to cut and run from the UK.

By simply reuniting Ireland, it would provide the added benefits of sorting out marriage equality rights and abortion access while allowing them to stay in the EU.

Here’s where it gets really confusing. In Westminster, the House of Lords can make amendments to legislation that has been passed by the House of Commons. These amendments are then bounced back to the Commons in what is referred to as ping pong.

This will continue until both Houses can work out an acceptable compromise. Keeping up? However, with the Brexit legislation, this extended ping pong match could continue until the Commons has had enough of the Lords amendments — and kicks them out of the process altogether using a veto procedure.

This veto, incidentally, was introduced because the Lords kept blocking Irish self-government in the Home Rule Bills prior to World War One. Again, us Irish causing trouble in the UK. In May, the Lords made amendments to the Brexit bill.

These included provision for a meaningful vote on the final terms of the Brexit deal and committing the UK to retaining membership of the European Economic Area. This was designed to ensure a soft Brexit with no border or customs issues — a good thing.

But the amendment to secure a meaningful vote on the final terms was rejected by the Commons — so this means that Westminster will have no say over the final terms of the UK deal to leave the EU. The most important issue from the Irish perspective is free movement of people north and south and customs.

This means that we might have an international border on the island again if no alternative is found as the Lords amendment to ensure a soft Brexit was not supported. These rejections will now return to the Lords for consideration. It means we are facing the possibility that they will reject the rejections and continue the ping pong game until the Commons has had enough.

The EU might extend the time for leaving from March 2019 to a later period, which only extends the confusion. But one unintended consequence of Brexit is making a united Ireland seem like an alternative for the people of Northern Ireland.

In a recent poll for the BBC, 28 per cent of people said that Brexit changed their minds on reuniting Ireland. In the same poll, 42 per cent of those surveyed said they would vote for a united Ireland if there was a referendum on the issue.

This follows on from a poll by Queen’s University in Belfast. One of the questions asked was whether there should be a vote on the border issue when the UK leaves the EU.

Some 46 per cent of those polled agreed with holding a referendum but 21 per cent said they would vote for a united Ireland if a referendum was held.

Northern Ireland never voted for Brexit. Close to 55 per cent of the population voted to Remain.

So, would you blame people in Northern Ireland for looking to their closest neighbour — no, not the mainland — but the Republic as a realistic alternative to the UK?

A united Ireland would remove them from a mess that they never voted for in the first place while sorting out some of their other issues at the same time. 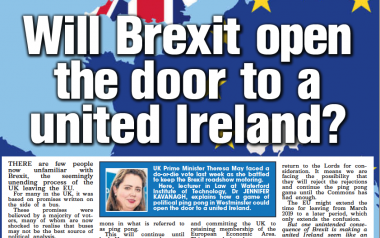