South East Technological University (SETU) held its inaugural award ceremony for students from the Departments of Science and Land Science at the Waterford Campus on Wednesday, 8 June 2022.

Following two years of virtual award ceremonies, students across multiple disciplines within both departments were recognised at this live event for their outstanding achievements throughout the year.

This event does more than just acknowledge the efforts of the students. It forms a stepping stone between their academic life and the future industries they will be entering. Both the profile of these awards and calibre of businesses associated with them demonstrates to the students the importance of their qualification and the potential for their future careers.

Prof Peter McLoughlin, Head of the School of Science and Computing in his opening speech said: “These awards are an extremely important part of our academic year where we celebrate our students’ achievements and also acknowledge the support of our many partners from across the region. The awards presented today are a fitting reward for a student group that have had to navigate the many challenges of the pandemic over the past two years. The resilience and dedication to their studies demonstrated by our awardees are qualities in which they can be justly proud. The new South East Technological University will be defined by its connectivity to industry. We are delighted therefore, that this year the number of partners who are supporting the awards has increased significantly. This support demonstrates their commitment to our students and is a vote of confidence in the future of higher education in region.”

This is the first time the Land Science Department has been recognised at the awards and shows the importance of the growth in this industry. Understanding the drivers, state, trends and impacts of different land systems on social and natural processes helps to reveal how changes in the land system affect the functioning of the socio-ecological system as a whole and the trade-off these changes may represent.

Environmental Science Association of Ireland Undergraduate of the Year Level 7 was won by Zak Dunphy, Waterford 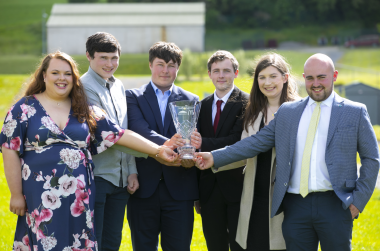