Applications were sought from people with attributes such as being creative, innovators, leaders, or who make significant contributions to community

The inaugural recipients of the Waterford Institute of Technology (WIT) President’s Scholarship programme were recognised at ceremony recently.

For September 2016 WIT launched an exciting new scholarship scheme which encourages and rewards young people who show a capacity to shape a better society.

The new programme sees five exceptional young students awarded scholarships with a total value of up to €12,000. Each President’s Scholar receives a bursary of €2,000 per year of study along with €500 per semester on each student’s WITCard (college smart card).

The 2016 President’s Scholars are: Louise Dunphy, Bachelor of Business (Honours) from Waterford who has participated in the arts and cultural sector; Gareth Dineen, BEng (Honours) Mechanical & Manufacturing Technology, from Tramore, Co Waterford who has an affinity for technology and would like to work for the European Space Agency; Hannah Nash, BA (Honours) Exercise & Health Sciences, Monkstown, Co Dublin, plays camogie and football for Cuala GAA club in Dalkey and former head girl of Coláiste Íosagain in Co Dublin; Cian O’Grady, BA (Honours) Social Care Practice, Herbertstown, Co Limerick, earlier this year won the Pramerica Spirit of Community Awards. He is working on a social enterprise that would help the homeless. Róisín O’Donnell, BSc (Honours) Agricultural Science, Poulmucka, Clonmel, Co Tipperary who is currently working towards her gold Gaisce award having already achieved both bronze and silver and works part time on with the Farm Relief Services when not helping out at home.

Addressing the scholarship recipients, WIT President, Prof Willie Donnelly said: “WIT believes that education is not about CAO points but about recognising the student as an individual. It is committed to helping every single student meet this intellectual and social potentials.

“The President’s Scholarship recognises and rewards young people for their leadership in their community. Having met the recipients of this year’s awards I was strong from their energy and enthusiasm. They bring a very special dynamic to the Institute which benefits the Institute and their fellow students,” he continued.

Also in attendance at the event were Heads of Schools at WIT, course leaders, families, and representatives from the students’ former schools.

The President’s Scholarship programme had sought applications from individuals with attributes such as being creative, innovators, leaders, or people who make significant contributions to community. The aim of the programme was to highlight remarkable people who demonstrate the ability to make Irish society a better place.

President’s Scholars will also be part of the Student Ambassador programme for the duration of their studies, representing the college and the Academic School in which they study. 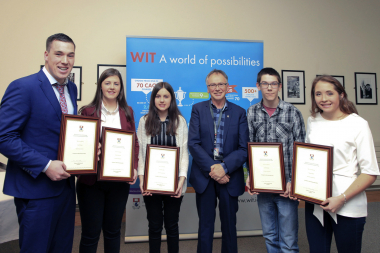