Waterford Institute of Technology’s School of Humanities has formally announced the appointment of Dr Michael O’Sullivan as the Institute’s first Emeritus Lecturer.

This much respected title is awarded to retired members of Institute staff who have made an outstanding contribution to the Institute and to scholarship in general.

Dr O’Sullivan is the Co-Founder and Director of the Spirituality Institute for Research and Education which hosts and supports the WIT MA in Applied Spirituality.

Speaking after the announcement Dr Suzanne Denieffe, Head of School of Humanities at WIT said: “This is a very fitting and appropriate award for Michael. We are so grateful for his leadership in the area of spirituality studies in the School. While we wish him well in his retirement, we are delighted that the Institute has seen it fit to award him Emeritus status.”

Professor Willie Donnelly said “This Emeritus award recognises the national and international impact of Dr O’Sullivan’s work and his support and inspiration of current and future generations of spirituality scholars. His contribution to spirituality studies will continue for many years to come as Emeritus Lecturer, as will his legacy to the field.”

Dr Michael O’Sullivan has made an invaluable contribution to scholarship in spirituality across the globe and he holds many leadership positions in this academic field. He is a Research Fellow of the University of the Free State, South Africa; a member of the Steering Committee of the Christian Spirituality Study Group of the American Academy of Religion; he is a founding member of the International Relations Committee of SSCS; he is on the Editorial Board of the Journal for the Study of Spirituality of the International Network for the Study of Spirituality (INSS), among many other high-level academic and scholarly positions.

One of his major contributions to WIT has been as Programme Leader of the MA in Applied Spirituality in the School of Humanities. He was the founding programme leader of the MA at WIT from 2016 until August 2021 and he also played a major role in bringing the MA to WIT and in leading the programme thereafter.

The School of Humanities at WIT is grateful to Dr O’Sullivan for his steadfast leadership of the MA. The programme is much sought after and attracts students of the highest calibre from across the world. 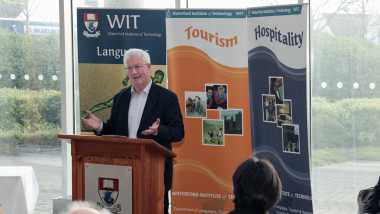 Dr Michael O’Sullivan, Emeritus Lecturer, pictured at the launch in 2018 of an international conference on pilgrimage at Waterford Institute of Technology: Pilgrimage and the Evolution of Spiritual Tourism. Photo: George Goulding