Mr Kevin Cardiff, Ireland’s representative at the European Court of Auditors (ECA), delivered a presentation at WIT on the topic of Economic Governance on Monday. 11 April 2016.

Prior to his appointment to the ECA in 2012, Mr Cardiff’s career was principally spent in the Department of Finance where he was heavily involved in dealing with the economic crisis which began in 2008. Mr Cardiff is the author of Recap – Inside Ireland’s Financial Crisis which was published by Liffey Press in 2016.

Mr. Cardiff’s address detailed the chronology of the crisis and emphasised how the crisis showed the need for robust accountability chains at both national and EU levels. He suggested that the guiding principles for the European Commission should be about accountability and democratic legitimacy. He demonstrated the role that the ECA tries to play in that regard.

He also spoke of the challenges currently facing the EU and demonstrated that the EU and associated countries (which are as diverse as Iceland, Switzerland and Turkey) already constitute a multi-speed Europe and this position is likely to become more pronounced over the coming years. This will add to the complexity of maintaining accountability and democratic legitmicy. 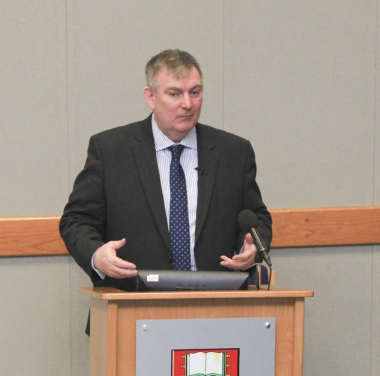