Irish Indo: What a difference a year made to car-loving business student Colin

Colin Cassidy, a business student in WIT was recently featured in the Irish Independent. Here’s what he had to say:

Colin says he didn't engage that well with school and admits to not doing much work for his first Leaving Certificate at the age of 17.

"I wasn't really great if people were saying to me 'do this' or 'do that', so I wouldn't do it", said Colin.

But, despite his initial experience, the ambitious Colin knew that he wanted to give the Leaving Cert another shot, although not back at his original school.

After chatting with his Dad, Colin did an interview for a place on the XLc project, a ground-breaking initiative set up by the Jackson family in Waterford for young people who fall through cracks in the formal school system.

He was accepted, although initially only as a part-time student and he had to earn his full-time place by showing his commitment to study.

"If you attend class and make the effort, they will give you every help. But if not, you are wasting an opportunity for someone else", said Colin

Second-time around, the Waterford lad had no difficulty getting through his "leaving", including a pass in music, which he had only taken up that year.

Colin, now 20, has his eye on a career in marketing or advertising, preferably in the motor industry. "I want to work in the car business, with the likes of Audi", he said.

After his Leaving Cert, Colin took the advice to adopt a step-by-step approach to pursuing his degree and career ambitions, by starting with a Post Leaving Certificate (PLC) course. PLCs act as a popular alternative platform for entering college for students who are undecided about what to do, or who were short the necessary CAO points for a place on their course of choice.

So, his next step was Waterford College of Further Education for a PLC course in business.

Colin sailed through with distinctions, allowing him to move onto the three-year (Level 7) Bachelor of Business programme in Waterford IT. Having successfully completed his first year exams, Colin is now about to enter second year.

When he completes his ordinary degree, Colin plans to top it with a Level 8 (honours) degree, specialising in marketing

He has really enjoyed the transition to college, where he find the lecturers really helpful and found that he know a lot of the lads in his class already. 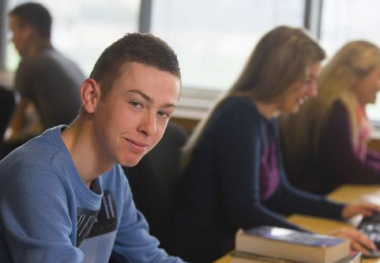