Joe Moran Discusses: We need to learn from Irish programme for Kosovar refugees

During the 1990s, Joe Moran a lecturer in social policy in the Department of Applied Arts at WIT, worked for the Refugee Agency as Senior Resettlement Officer and was part of the team that managed the last major intake of refugees into Ireland, 1,032 Kosovars in 1999.

In an article published in the Irish Times on Saturday, 24 September 2015, Joe discusses the current refugee crisis.

There are some memories that stay with you for a life-time. For me the night of May 10th, 1999, is one of those memories. I waited, along with politicians, officials, dignitaries and a huge media presence, for the first of the 1,032 Kosovar refugees to arrive at Kerry Airport. The night was blustery and damp. The plane was later than expected and the family groups from Kosovo who disembarked were exhausted and looked bewildered after a long journey from a refugee camp in Macedonia. The families who arrived that night, bound for Killarney and Tralee, were the first of a number of groups to come and spend two years in ten reception centres in the southern and eastern parts of the country – in Kerry, Cork, Waterford, Kildare and Wicklow.

This was the beginning of the Irish Government’s Kosovar Refugee Programme. Ireland, among a number of nations, responded to the plight of the Kosovars who had fled over the border to Macedonia, a poor country that could not cope with the influx from their war-torn neighbour. The story has a familiar ring to it. The response by the vast majority of the Irish people was at that time as it is now, one of compassion. I remember when the buses carrying another group of Kosovars arrived in Baltinglass, Co Wicklow, children lined the street leading to the reception centre waving flags to welcome their new neighbours.

I worked for the Refugee Agency at the time, which was an agency of the Department of Foreign Affairs responsible for the care of programme refugees. We were faced with a huge logistical problem to accommodate this large number of people. But within six weeks of the Government decision to provide protection for 1,000 people 10 reception centres were located and made operational. And within a month of the first plane arriving at Farranfore, all of the expected Kosovars had arrived.

The Refugee Agency had some experience of accommodating refugees in a reception centre, as we had been responsible for the resettlement of Bosnian programme refugees who were accommodated at the Cherry Orchard centre in Dublin in the 1990s. But the scale and the intensity of the Kosovar programme was different and as a result much more challenging for all involved.

Now we are facing an even bigger challenge to respond to the appalling refugee crisis that has again erupted on Europe’s borders. The people of Ireland and across Europe have spoken; they want their governments to help their fellow human beings. Governments, normally slow at responding positively to refugee matters for fear of upsetting their presumed anti-immigrant electorates, have for the moment more or less thrown out the rule book. “Fortress Europe” has decided to open borders and to welcome large numbers of refugees from Syria and other countries into the EU. This flies in the face of the EU’s immigration policy. It is unprecedented.

What of Ireland’s response to this crisis? The decision of the Government this week to admit 4,000 people is to be welcomed, even if the headline figure is a bit of a sleight of hand. There was already a commitment to accept approximately a quarter of this number of people for resettlement through earlier decisions. Yet, the number of people who are being invited into Ireland is not insignificant and will again pose a major logistical problem. Ireland has valuable experience after years of resettlement programmes and providing Direct Provision for thousands of asylum seekers since 2000. We know more now about how to respond to this challenge than we did at the time of the Kosovar programme. But based on the limited information that is available about this new programme I am worried.

Under the Refugee Act 1996 there is provision under section 24 for the Government to give leave to what are termed “programme refugees”, to enter and remain in the State for temporary protection or for resettlement. Of course it is a matter for Government to decide on the nature of the State’s response but it is strange that instead of invoking this section of the Refugee Act the Government appears to have gone down a different path. Programme refugees from Bosnia and Kosovo in the past did not have to apply for asylum, were given leave to remain in the state and were accorded the same rights as full refugees (but only to a point with the Kosovars, to which I shall return). This allowed them to avail of the right to work, to education and training and in general to the same rights accorded to citizens.

Under this new programme called the “Irish Refugee Protection Programme” those invited into Ireland will have to go through the asylum process. This is a new and unwelcome departure. According to the Government press statement on the launch of the programme, decisions on refugee status will be made “within weeks”. I would like to believe this but given the generally recognised “broken system” of asylum in Ireland I am unconvinced. There has been no explanation given why the people being invited into Ireland should have to go through the asylum system. There is a legitimate alternative through section 24 of the Refugee Act that would save them the anxiety-provoking asylum route which effectively places people’s lives on hold for the duration of the process. This is asking people to jump through a cruel and unnecessary hoop when they have endured so much already.

The second issue of concern is accommodation. The Department of Justice issued a second statement later on the day of the launch of the programme in which it clarifies that “applicants will not be placed into the established Direct Provision System”. It is proposed to accommodate them in a network of “Emergency Reception and Orientation Centres”. This is just a play on words. Applicants may not be placed in the existing Direct Provision System but in the absence of further clarity from the Government what I understand is being proposed is a direct provision system in all but name.

I think the Direct Provision System is an affront to human dignity for people who have to live in that system for long periods of time. But I acknowledge there is no alternative to accommodating large numbers of people in an emergency. However, it can only work in the interests of those who must reside in this accommodation if their stay in such centres is for a short period of time. From the experience of the Bosnian and Kosovar programmes we learned that people become institutionalised very quickly and that has negative repercussions for their wellbeing.

The Government could and should use this moment to extend our compassion, as well as solve its accommodation problems for the new programme. It could give a one-off amnesty to the thousands of people who have been in the asylum process and Direct Provision System for over six months. The existing accommodation could then be used for the new arrivals. I am fully aware of the immediate problem that arises from my proposal. Where would those who leave the Direct Provision System live? This is where the bigger housing crisis comes into play as the lack of social housing, the scarcity of rental accommodation and low levels of rent allowance would make transferring people from Direct Provision to normal housing a huge challenge. But this accommodation problem will have to be faced sooner or later.

I directly challenge the Government to overcome its lack of sympathy to asylum seekers and show the same compassion to them that the people of Ireland are showing towards the Syrian refugees.

This Government proposal for the Syrian programme, to put the applicants through the asylum process, is far from the more open and benign approach we showed to the Bosnian refugees in the 1990s. They were given the right to resettle very early on. The Government began to shift to that approach when the Kosovars were denied the right to live outside of the reception centres. Families and individuals lived in these centres for two years as the Government prevaricated about their long-term future.

So we may provide under the new programme, as Minister for Justice Frances Fitzgerald rightly says, “a safe haven” for the new asylum applicants from Syria and other countries and that is undoubtedly the priority. But surely dignity and wellbeing cannot be pushed to one side?

We will only store up more problems in the medium to long-term by going down the proposed route. If we are going to offer refuge we should do it in a way which is compassionate and humane and not put up unnecessary barriers. Asking these new arrivals to go through the asylum process is a regrettable and unnecessary barrier and one which I believe does an injustice to the wishes of the vast majority of the Irish people. 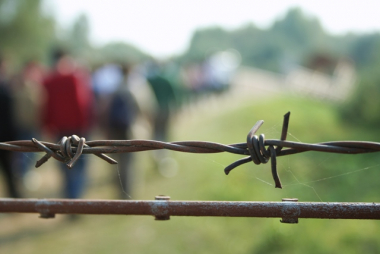