John Hume MEP, Nobel Peace Laureate, lent his name to this scholarship at WIT which raises the profile of the business and the community relationship

The winner of the John Hume Scholarship at WIT has been announced. This year’s scholarship was awarded to Sean Walsh, Bachelor of Business (Hons) – WD048. The scholarship was presented to Sean at the School of Business Recognition of Awards ceremony on Thursday 11 October, by Linda O’Kane on behalf of the combined Credit Unions in Waterford.

The 2018 winner Sean Walsh, a past pupil of Mount Sion CBS, Waterford, is now in his second year of study. "I am delighted to be recognised for my continuous efforts and study and hopefully it will motivate me further," he said.
Sean's dreams for the future include: to work in the business sector of the aviation industry. 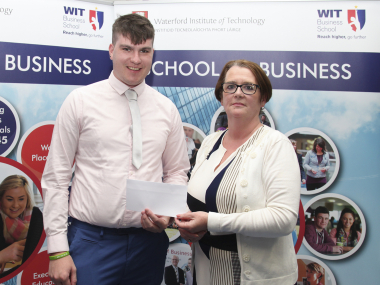