In four decades of enduring endeavour Kenneth G. M. Bond has surveyed and recorded butterflies and moths in all counties in Ireland. Over the extensive period of that research project he has accumulated a database of 50,000 records. With this he has made a lasting and prized contribution to our understanding of Irish Lepidoptera. With a particular expertise in the taxonomy of moth groups know as micro-Lepidoptera he is recognised amongst Europe’s most reputable experts.

It was while working as a metrological reader on the Isle of Man that his studies first began in 1970. Ten years later he removed to Dublin. Here he read for a degree in Zoology at Trinity College. He then embarked on a programme of further study at University College Cork. His work focused on a taxonomy of the larvae of Phyllonorycter, a particularly complex group of leaf-mining moths.

Ken has published more than thirty research papers. Many of these broke new ground to discover species that were hitherto unknown in Ireland.  He was one of the principal contributors in 1990 to the landmark publication, in eleven volumes, titled The Butterflies of Great Britain and Ireland.

An inspiring figure then in his own realm, a researched and published scholar, and yet he is more. Ken is also a skilled linguist. His sense of learnedness, therefore, transcends that broad arc of knowledge, the Sciences and the Arts – the reasoned and the revealed.

In combining these qualities Ken departs from the orthodoxies to find that middle space in between the Baconian and the Cartesian.

In his recently published book, The Scientist as Rebel, Freeman Dyson emphasizes that theme.

From Gallileo’s time scientists have been rebels.  Like artists and poets, they are free spirits. They resist the restrictions their cultures impose on them. In their pursuit of nature’s truths, they are guided as much by imagination as by reason and their greatest theories have the uniqueness and beauty of great works of art.

In this narrative then it is remarkable and ironic to find that in Irish folk lore the butterfly is the symbol of transformation and creation, the soul of the other world and the spirit of the imagination.

Was it not to the moth that Yeats made such gentle and reflective reference in his wonderfully cadenced The Song of Wandering Aengus?

I went out to the hazel wood,
Because a fire was in my head,
And cut and peeled a hazel wand,
And hooked a berry to a thread;
And when white moths were on the wing,
And moth-like stars were flickering out,
I dropped the berry in a stream
And caught a little silver trout.

In a lineage that may be traced as far back as pre-Christian Ireland the role of recorder and keeper of the wisdom was revered to occupy aristocratic privilege. He was among the first in dignity.  He was amply provided for. He submitted to no servile work. The reverence demonstrated in his favour was of the highest perfection.

For those who keep the annals today, for those who stand custodian of the wisdom gathered to be returned, those conventions are no longer observed.

And still inherent in the psyche of the collective folk memory of our people there remains that profound respect for those who are inspired to study and read the secrets of nature, to observe the patterns of renewal and decay and to pronounce on issues of our common well-being.

Kenneth G. M. Bond stands stoutly in that tradition. It is our privilege then, but more, it is our duty, to confer on him honoris causa a Fellowship of the Waterford Institute of Technology. We are proud to do so. 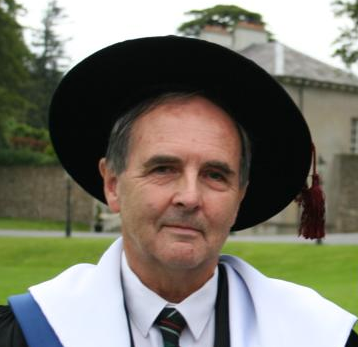