The New Frontiers programme for early stage entrepreneurs is open for applications for its 8-week programme starting in September with €15,000 financial support available for innovative business start-ups in the south east*.

New Frontiers is for potential entrepreneurs who have a well thought-out innovative business idea or an innovative technology that has the potential to be developed into a scalable high potential start-up company.

New Frontiers Programme Manager at Waterford Institute of Technology (WIT), Eugene Crehan notes that there have been more company formations in the first few months of this year. “Despite the buoyant jobs market, the increase in company formations indicates people are still interested in pursuing their own business ideas and using their talent to create viable products and successful companies.

“The time commitment for Phase 1 is one evening per week for 8 weeks, starting from early September. This is a good investment of time for people already putting in long hours and late nights to put their skills and expertise to use for their own benefit. As Phase 1 takes place in the evenings it is ideal for working people who want to investigate their start-up idea over a few months.”

Past participants from Kilkenny in recent years include SocialFeedia.

Mel Clohosey from Urlingford, Co. Kilkenny is the founder of SocialFeedia.  Mel embarked on the programme with his farm-to-fork platform for farmers and producer groups who seek new routes to market and want to sell direct to consumers.  SocialFeedia provides the farmer with the data, analytics, ecommerce and home delivery which the consumer demands, allowing the farmer to make better decisions in planning what food to produce which will eliminate food waste and increase the profit margin by selling direct to the consumer.

Mel says, “For me the biggest benefit from the New Frontiers programme is the comprehensive support and knowledge that not only your company gets but also the invaluable skills that the founders receives as well. I could not recommend New Frontiers highly enough to anyone thinking of embarking on the journey of starting a company.”

In 2016 Enterprise Ireland announced increased supports of early-stage entrepreneurs over five years across the south east region with funding of €2.7m to run New Frontiers programmes in Waterford and Carlow Institutes of Technology.

Early-stage entrepreneurs from across the south east with three hours a week to spare are invited to apply for the 8-week New Frontiers programme – the deadline for applications is Monday, 3 September. Applicants apply online at www.wit.ie/newfrontiers.

Phase 1 of the New Frontiers Programme will commence in Waterford at Arc Labs, the innovation hub based on WIT’s West Campus in September 2018 on a part-time basis, with Phase 2 commencing in December 2018.

Waterford Institute of Technology in collaboration with the Institute of Technology Carlow and Enterprise Ireland is currently recruiting for its New Frontiers Entrepreneurs Development Programme. This intensive training and support programme provides desk space, mentoring, business master classes, networking plus €15,000 in financial support to accelerate business start-ups across the Southeast region. (*Subject to eligibility)

New Frontiers is for potential entrepreneurs who have a well thought-out innovative business idea or an innovative technology that has the potential to be developed into a scalable high potential start-up company. Applicants should have enthusiasm, confidence and single-mindedness about setting up and running your own business and should be committed to spending time on researching the market potential and launching a new business.

Over an intensive 6 month period, participants will learn how to establish and run a new high growth company.

The New Frontiers Entrepreneur Development Programme has launched a new website and blog, that aims to reach out and attract potential, high-quality applicants to New Frontiers. It shows the benefits of the programme and giving advice to help people thinking of starting their own business. You can find it on www.newfrontiers.ie

Waterford Institute of Technology (WIT) signed a €2.5m contract with Enterprise Ireland in 2016 which will fund a significant expansion of its incubation facilities in ArcLabs Waterford. The 1,000m2 extension on its Carriganore campus will enable the Institute to double its capacity to support technology start-ups in the South East region.

Established almost 10 years ago ArcLabs is well known nationally and internationally for the unique incubation, research and enterprise support framework it provides to entrepreneurs and technology based start-ups. Home to more than 60 companies since its foundation ArcLabs has been a key driver in the development of an ICT/mobile services cluster which has emerged in the region over the last decade.

The co-location of entrepreneurs and technology based businesses in close proximity to one of Europe’s leading ICT research centres, the Telecommunications Software & Systems Group (TSSG), provides a research and innovation hub of more than 250 scientists, engineers and technology professionals on one site. This has proven to be a very powerful model in creating leading global Irish companies such as FeedHenry and NearForm as well as attracting in ICT based international companies into the region. Currently 27 companies are based in ArcLabs Waterford and Kilkenny employing more than 190 staff. 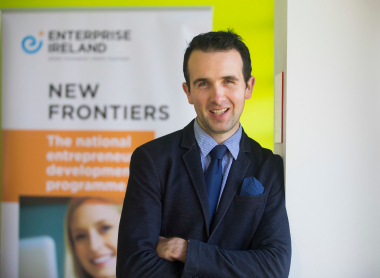