Languages and Marketing Student of the Year

Eleanor Roche received the award of Student of the Year on the BA in Languages and Marketing at the Waterford Institute of Technology’s Department of Languages, Tourism and Hospitality Awards Ceremony recently.

Eleanor is an exceptionally gifted and hard-working student and she graduated last year with a distinction (H1). She spent Semester 1 of her third year in Reutlingen, Germany and part of Semester 2 in Huelva in Spain. Her first job is a marketing position in the Head Office of Lidl, Ireland, where, as part of her role, she liaises with the German Head Office. Eleanor also received an award in her first year for being the student with the highest points in her Leaving Certificate at WIT. 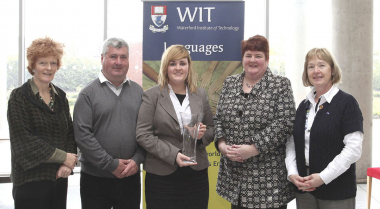