The scheme sets out the principle commitments of WIT in relation to services and activities that will be provided through Irish which means that designated services across the Institute will be offered bilingually. The scheme, which is in line with requirements of the Official Languages Act 2003, was approved by the Minister of State at the Department of Arts, Heritage and the Gaeltacht for a period of three years with effect from 6 October 2014.

An tOllamh Muiris Ó Laoire praised the scheme “Tá obair den scoth curtha i gcrích anseo. This scheme has much to commend it - it is practical, ambitious and realistic and has an energy and hopefulness that singles it out from other language policy documents. The scheme now needs to be implemented which will require change and the involvement of all staff. Interest in learning and using Irish in WIT has grown in recent years and that is an important beginning. This scheme will come to life at the local level, the actions and interactions of the WIT community”.

Having thanked those involved in the development of the scheme and those who will ensure its successful implementation, Dr Ruaidhrí Neavyn, President of WIT, said, “The scheme will raise the profile of the Irish language on campus by making the language visible and ensuring that it is heard in working and public places across the institute. This will not only benefit the Institute community, but will help us serve the needs of the south east region, and give due recognition to the proximity and importance of Gaeltacht na Rinne.

WIT has a long tradition of excellence in language teaching and learning. This tradition has taken on a further dimension with modules in Irish offered to full-time students as part of the Bachelor of Arts (Honours) since September 2009 and the Bachelor of Business (Hons) has been offered with Irish since September 2010. WIT will continue to offer modules in the Irish language and hopes to extend the availability of Irish as electives in each of the academic schools.

The scheme also gives the Institute the opportunity to forge stronger links with Gaeltacht na Rinne and the regional area, which are in line with WIT’s mission statement: ‘to contribute to the economic, social and cultural development of the south east region and beyond’. Since 2006, the Institute has worked closely with Údarás na Gaeltachta and Nemeton to offer the Ard-Dioplóma i Léiriú Teilifíse/Higher Diploma in Television Production.

Irish is continually promoted among staff in the Institute as part of Continuous Professional Development through the provision of language support, Irish language classes at different levels, specialised classes for staff in targeted front-line areas, conversation circles (ciorcail comhrá), cultural and social events during the year, and organised trips for staff and students to Gaeltacht na Rinne. 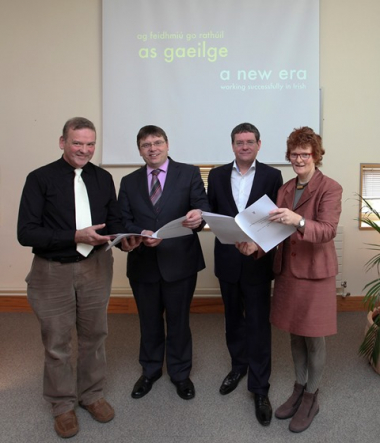