Jeft Tham, a Malaysian student studying the BA (Hons) Accounting at Waterford Institute of Technology (WIT), was awarded the accolade of ‘International Student of the Year’ at the third annual USI Student Achievement Awards Ireland at an event in Dublin Castle last week.

The event, presented by broadcaster Tara Flynn, saw twenty awards made to individuals, students' unions and clubs and societies from across the island and student leaders and representatives gathered to mark the contribution made to student life by individuals, clubs and societies, and to reflect on campaigns and initiatives taken on campuses across the island of Ireland.

According to Christina Fitzharris, President of WIT’s Students’ Union, “The WIT Students' Union team is thrilled for Jeft and his well-deserved achievement. For someone who has not been in Ireland very long, he has not waited for things to happen for him but has started them himself. This award acknowledges the great work that he has being doing over the past year.”

Christina continued, “The Union of Students' in Ireland Student Achievement Awards are an annual event that celebrates some of Ireland’s most innovative, hardworking and dedicated students and we are very proud that WIT has had students win awards every year since the awards were established three years ago.”

In Malaysia, Jeft was a member and president of a number of societies, from the Dance Society to Enactus TARUC, and his community involvement did not falter on his arrival in Ireland.

During his time at the Institute, Jeft has become a consultant for Cork Enactus, he founded and acts as Chair for the WIT Malaysian Society, which helps bring together people of similar cultures as they integrate into a completely different environment and he regularly organises cultural trips for society members to help them embrace the Irish culture.

Jeft organised many events at the Institute and one of the most impressive was the Malaysian culture week. He also hosted and organised the WIT Chinese New Year Dinner which, due to its success, will now become an annual celebration. Jeft also liaised with the canteen staff and Institute officials and once a week the menu includes an international dish from Malaysia, China or India.

Closing the event, President of the Union of Students in Ireland Laura Harmon told the award winners and nominees: "Students, whether they're involved in local campaigns on campus, helping the homeless in their communities or engaging with the affairs of the nation, can be a powerful force for progress and the common good in Ireland. We're honoured to be able to learn from them and share the lessons of their work - and to tell their story to the world." 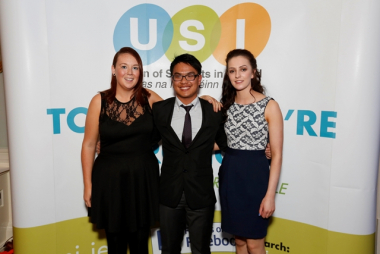