The President of WIT, Prof Willie Donnelly along with the Mayor of Waterford City and County, James Tobin recognised the importance of WIT's International student community to the City of Waterford, at a reception for International Students, held at the C

The President of WIT, Prof Willie Donnelly along with the Mayor of Waterford City and County, James Tobin recognised the importance of WIT's International student community to the City of Waterford, at a reception for International Students, held at the City Hall in Waterford on Thursday 30 April 2015. The purpose of the event was to thank students for choosing WIT and Waterford as the destination for their overseas higher education.

During the night a number of students had their achievements highlighted and received awards in order to thank them for their multiple accolades accumulated throughout the academic year. One student in particular got a special mention by Prof Donnelly, in honour of being crowned ‘USI International Student of the Year’ two weeks previously. According to Prof. Donnelly, Jeft Tham is an extraordinary student. He is seen as an intellect among his friends and lecturers, has a very dynamic personality and without doubt a meticulous event management professional. Both the staff and the entire student community at WIT are fortunate that Jeft came to WIT to complete his Bachelor Degree in Accounting. As Jeft completes his studies this May, I wish him every success in his future career and I hope he keeps in touch with the institute, added Prof Donnelly.

Jeft was competing with international students from Higher Education Institutions all over Ireland for the award and was nominated by one of his Irish classmates at WIT. A Brazilian student from CIT along with a US student from UCC was also nominated for the prestigious award, however, Jeft and Malaysia came out on top. The award is running for the past three years and demonstrates the invaluable support of students’ union across the country for Ireland’s internationalisation agenda.

“As WIT further develops educational and industry links with Malaysia, we hope to attract more students like Jeft to WIT and we are confident that all of our Malaysian Alumni will support our endeavors and act as advocates and ambassadors for both WIT and Waterford City. Malaysia now represents that second largest cohort of self-financing international students at WIT after China.” commented Ms. Sinead Day, International Affairs Manager at WIT.

“Our Malaysian students have contributed significantly to the spirit of the student community at WIT. The majority of our Malaysian students are here for degree top-up; therefore they are only here for 1-2 years. In such a short period of time they have assimilated to the Irish way of life and have managed to forge meaningful relationships with their EU classmates and other international students. Jeft in particular proved himself as a team leader that was instrumental in ensuring the Malaysian Student body was visible across WIT. His vision and methodology for showcasing Malaysian Culture across the campus was quite unique and invigorating to witness. I really enjoyed working on projects with Jeft” commented John Joe O’Farrell, who manages WIT’s relations in Malaysia. 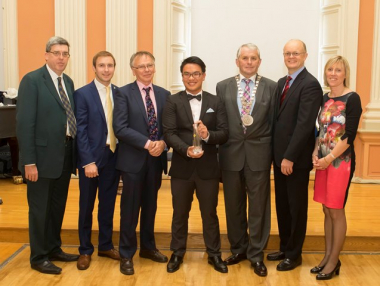