Marian Ingoldsby, composer and lecturer in the Department of Creative & Performing Arts, was recently commissioned to write a piece for baritone and piano. Never Give All the Heart, a setting of WB Yeats, was premiered on 15th November last, at the first concert in Abbeystrewry Church, Skibbereen, by Benjamin Appl, internationally renowned baritone, and pianist Gary Matthewman (who appeared in an episode of Downton Abbey with Dame Kiri Te Kanawa, and is also a highly accomplished accompanist).

The composer attended and gave a pre-concert talk at that venue. Subsequent review in the Irish Times was very favourable, and the concert toured Clifden, Hugh Lane Gallery, Dublin, Tipperary Excel Centre and Triskel Christchurch, Cork.  Marian’s orchestral work, The Heron by the Weir, commissioned by the Ulster Orchestra in 2007, will be broadcast again in January 2016 on BBC Radio Three’s Hear And Now programme. 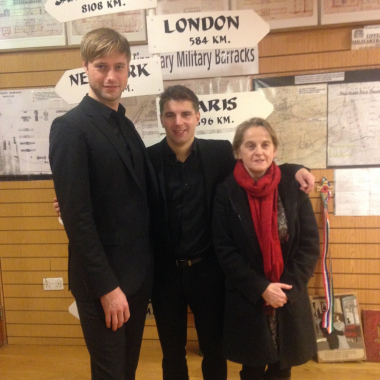