Master’s made my c.v. stand out in comparison to others, Anna

Anna Carolina Fenicio Coutinho is a past pupil of ESPM - Escola Superior de Propaganda e Marketing, São Paulo, Brazil. She came to Ireland to study MBs in Internationalisation in WIT.

Why did you choose to study in Waterford?
After my graduation on university, I decided that it was time to have an international experience, but I didn't want to do a language course and started looking for other type of courses in English, which is a language that I already knew well.

I already knew that Ireland was a good country for international people (mainly Brazilians) and that's why I decided to look for some universities and countries inside Ireland.

What was your experience?
It was really good! I learned a lot, not only on the academic field, but also as a person. I was living by myself for the first time, so it was a real challenge to be responsible for my finances and duties inside my new home, so it was necessary to learn how to better manage my time.

Also, I learned American English in school, so another challenge was to understand and practice this new accent and, therefore, improve my skills.

Finally, regarding the classes, I learned a lot and was able to comprehend things from a different perspective.

Another thing that I really enjoyed was the practical cases with real companies that we had on the second semester, it was a good way of understanding the Irish market and to apply in the real world some of the things we learned in theory during some classes.

Can you recall your feeling when finding out you were offered a place in WIT
Yes. I was really nervous because the admission process in Brazil works in a different way, so it was my first application process and I also had the language as a barrier, since it is not my native language.

It was overwhelming to discover that I was offered a place in WIT not only for the MBs in Internationalisation but also for the MBs in Marketing and that I would have the privilege to choose which one of the courses I would want to take. I celebrated a lot, because it was one of my greatest academics achievements.

What advice would you give to students considering your course?
I believe the first important thing is to learn how to manage well your time, being able to handle the subjects, academic papers and tests that we take during the course. So, organize yourself in order to be able to manage that without any major problems, because it is possible, even though you might think is too much.

The second thing, is to engage and participate in the classes. Not only for the teachers "notice" you, but also because is a good way of learning and absorbing new information, getting to know your colleagues and engaging on constructive discussions due to different perspectives.

When and where was your first job after graduating?
After graduation, my first job was at Bytedance. I started in October of 2018 in São Paulo, Brazil.

How has your studies at WIT helped you to get where you are today?
With no doubt, having a Master degree of a course that was done abroad made a huge difference on my curriculum.

A Master itself would already be considered a differential, but since is not common to do a Master abroad, having the WIT certificate made my curriculum to stand out in comparison to others during the recruiting processes, which increased my chances of getting a job.

How did your experience at WIT help get you to where you are now?
They were definitely the great base for me to get where I am today and to achieve all that I did during the course.

The MBs Internationalisation itself is very important, but I believe the people with who you share this experience with are what make the course successful, besides being the link between the academic, professional and personal achievements you have on the way.

Tell us whatever you want that we haven't asked about
Besides the friends I made because of the MBs Internationalisation course, I made some other international friends who lived in the same accommodation as I did. And became really close to each other, so much that some of them will come to Brazil next year, in order to know some cities, but also for us to meet again.

Living arrangements
During the MBSI course I lived at Riverwalk Accommodations, which was a great experience.

What is Waterford like as a city for college social life?
The city itself is very "family friendly" but there are a lot of students, both Irish and International, so the city ends up becoming a good pole for students. Good pubs, some clubs and a lot of meetings, hang outs in the student’s accommodations (but these places are also good for study).

Also, the college promoted some international events, where we could know better each other and learn a bit about the different cultures. 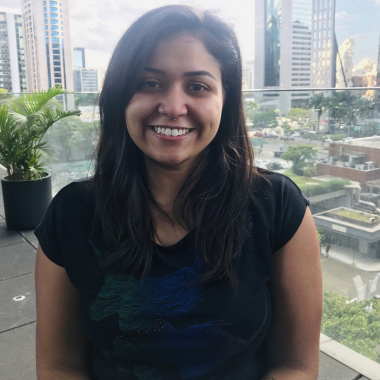 'The college promoted some international events, where we could know better each other and learn a bit about the different cultures'