Students of Nemeton TV and Waterford Institute of Technology premier their exciting new documentaries and drams. Bring your popcorn as all are subtitled

This year’s group of talented emerging filmmakers from Nemeton TV and Waterford Institute of Technology’s Higher Diploma in Television Production premiere their exciting new documentaries and dramas to family, friends and the public. Bring your popcorn along as all the films are subtitled!

Cian Cusack, a native of Waterford and an accomplished musician wrote, directed and produced this thought provoking documentary. The documentary titled “Amharclann na ndaoine” focuses on “The Theatre Royal” in Waterford and the impact and effects that the Covid 19 Pandemic had on both the workers and the management there. After working in the theatre himself for many years the topic of theatre always interested him and when the Coronavirus Pandemic struck it opened up a brand new conversation about the impacts it had for musicians all over Ireland.  In one word: Hopefull

Social Media enthusiast Ailish O’Donovan and proud content creator of the YouTube channel “Ailod of ASMR” is the writer and director of the Short film Comhghairdeas. After graduating from UL with a BA in Irish and Media, Ailish thought this course would really fuse her interests together. Her short film is about a man who is unsuccessful in finding love and is jealous of his younger brother getting married before him. A traditional story of unrequited love with a twist. One word description: Peculiar

Gearóid McNamara is a teacher teaching in Meánscoil San Nioclás and skilled Irish Traditional musician from Tulla County Clare. Gearóid is the director and came up with the concept for Boscadóir, a documentary which centres around three young accordion players from Munster. The programme is about the music they have learned and also comparing them to the accordion players that have gone before us for example Joe Cooley and Paddy O’Brien. In one word: Enthusiasm

Martina Falvin who decided to do the course to refresh her Irish Language skills and fluency. Martina has a keen interest in radio and is the director and visionary behind the documentary Capaill agus Caráiste with help from editor Ciarán O’Goibin. The documentary is about the sport of carriage riding and focuses around a masterful carriage driver Paddy also  featuring some archival material. Martina thinks the interaction between horse and man is very powerful and she hopes to show this connection in her documentary.  One word description: Passion

History Fanatic Kevin O’Grady is the Director and Producer of Paranormal Gaeltacht. Kevin graduated from Trinity with a BA in History however he has decided to go down a different path which infuses his love of the irish language and media. Gaeltacht Paranormal tells the story of two paranormal investigators who are based in the Ring Area. However what first appears to be evidence of paranormal activity is actually something very different. A hilarious turn of events could lead them to a run in with the law? In one word: Ridiculous

Shane Noonan who has a passion for Netflix and Irish is the Director and Producer of “NO NAME YET”. Shane graduated from Irish and Media in Mary Immaculate College and decided it was time to follow his love of TV and Film and pursue the Nemeton Ard Dioplóma i Léiriu Teilifíse & na Meán. His documentary is about climate change and how together and individually we can take a stance about it. Shanes documentary features eco-friendly livers who implore us to make more ecologically friendly choices and how if we make small changes we can make a big change to the planet we live on. In one word: Modern

Seán Dowd, an aspiring editor, is the director of the documentary “Siondróm Sonas”. Seán enjoys the editing and post-production side of film production the best. Seán created  this documentary on a topic very close to his heart. Seán was inspired by his 13 year old brother with down syndrome. In his documentary Seán wants to show how much his younger brother has changed and touched the lives of all the members in his family for the better and how his life wouldn't be the same without him. In one word: Perspective

An Dréapadóir by Eoin Geoghegan

Established Irish Actor Eoin Geoghegan is making his directorial debut with his film “An Dreapadoir”, a film which he wrote, directed and starred along with Maíre Dineen as the Producer. Eoin says “I was always fascinated by the production side of films and after 20 years of acting I decided this year was the perfect year to pursue this interest”. An Dréapadoir is a dark comedy about how a man survives when stripped to his bare necessities, a gripping funny film that isn't your quintessential dark comedy by any means. In one word: Energetic. 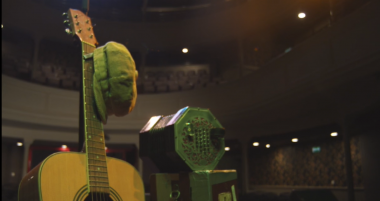 An image from the production