The WIT Youth Choir will also be promoting WIT and Waterford in Slovakia with the inclusion of works by Waterford composers, and former WIT lecturers

The WIT Youth Choir have been accepted to participate in the International Youth Music Festival, Bratislava this summer. Held in July, groups invited now include choirs from Hong Kong, Australia, South Africa and Europe. Director of the festival, Dr. Milan Kolena, said: "It will be an honour for us to have the WIT Youth Choir from Ireland in our festival as it will bring a great contribution to the festival and the Slovak choral culture."

With 40 members from throughout the region the Youth Choir is the senior group of the Music School's Choral Programme and is considered to be one of the top youth choirs in the country. Already having taken home prizes from previous international trips to Prague and Belgium the choir also has the accolade of winning the National Competition for Youth Choirs at the Cork International Choral Festival on each of their last five visits.

Conductor Niall Crowley went on to say: "It's a testament to the members that they are at the standard to go and compete at festivals such as Bratislava. We always try to fly the flag high for Ireland each time we participate at such festivals. Now that I think of it we will also be promoting WIT and Waterford with the inclusion of works by two Waterford composers with strong links to the college. The pieces are composed by former music lecturer Eric Sweeney and Fintan O'Carroll - who was instrumental in the design of the BA Mus - and stand proudly as centre-pieces in our programme." 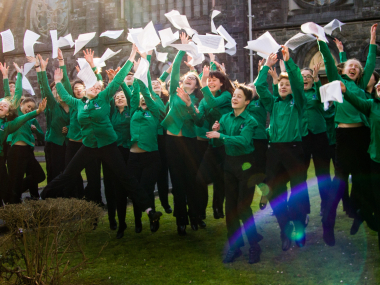