One of the initiatives of US Ambassador to Ireland Kevin O’Malley has been the Creative Minds Series, which invites prominent Americans to talk about their creative process with the next generation of Irish leaders.

Among his musical visitors at his residence in the Phoenix Park were the great banjo player Bela Fleck and his wife, singer and banjo player, Abigail Washburn and Jennifer McAndrew, Deputy Director of Public Affairs at the Embassy, kindly extended an invitation to some WIT music students to attend the performance.

When the Ambassador was introduced to WIT student Jack Kennedy, he immediately pointed out the bedroom where the other Jack Kennedy (JFK) had stayed during his visit in 1963.

The evening was very enjoyable and informative for the students. A highlight was the stunning music played by Bela and Abigail who gave a copy of their latest CD to each member of the audience as well as an autographed poster. 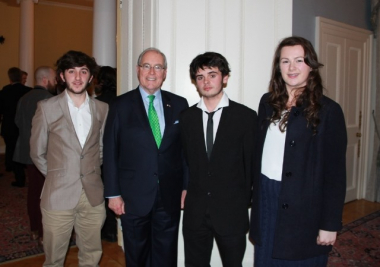