Once again, the students of Waterford Institute of Technology’s Higher Diploma in Television based in Nemeton TV in Gaeltacht na nDéise dominate the Student Media awards in the categories for Television Documentary or Drama.

This year the work of five students was recognized as being of the highest quality. This year’s films offer a fascinating and wide range of stories.

Oisin Mistéil a young Dublin writer and director was inspired to write his second drama ‘Amach an Sliabh’ while walking in the Comeragh Mountains in Co Waterford. The stunning background of the majestic lake of Coumshingaun became the perfect location and centerpiece-piece for his film about two sisters dealing with grief in very different ways.

Seán Ó Ciardha from Dublin presents and directs his first short documentary ‘Faoin gCeann Tuí’, a remarkable story of how a visit by a BBC television crew to the filmmaker’s ancestral home in Conamara in the 1960’s impacted the lives of a generation of his family and local people.  As Mártan tells us in the film  ‘We had never even seen a Television in our lives … it was like we were starring in a Cowboy movie or something’.

Natália Uí Fhaoláin a Brazilian native and Irish speaker, Natália explores what it means to find a home away from home in her short film ‘Ón Rinn go Reykjavik’. In the film, we hear from two women who exchanged their native homes for very different places, cultures and languages. Natália meets with An Rinn native Sibéal Turraoin, who now lives in Iceland and explores what similarities and differences they share on their unlikely journeys.

Áine Ryan of the well known ‘Jim the Mill’ family from Upperchurch, Co Tipperary, has written a beautiful children’s short drama Feadóg/Whistle.  The film tells the story of a magic tin whistle and a  young boy called  Eoin who is obsessed with playing it. This short film is another string in Áine’s bow as her quirky dramas have already gained her great critical acclaim, including five star reviews at the Edinburgh Fringe Festival.

Amii McGuinness’ short documentary ‘Leanbh Déardaoin’ features a boy named Ben who has Down’s Syndrome. In this heartwarming biopic, we get a glimpse into Ben and his family’s world, we find out his parent’s worries and concerns and we see his impressive achievements from birth to the present day. This moving, feel-good documentary shows how one person can affect so many people in a community.

About the TV Production programme

The highly-acclaimed post-graduate Higher Diploma in Television Production is accredited by Waterford Institute of Technology and backed by Údarás na Gaeltachta. It is widely regarded as the most industry-focused course in the media sector. The core belief is that third level courses are relevant, dynamic and genuinely prepare students for industry. Whether students plan to be in front or behind the camera the course is there to help and equip them with the skills needed for the media industry. 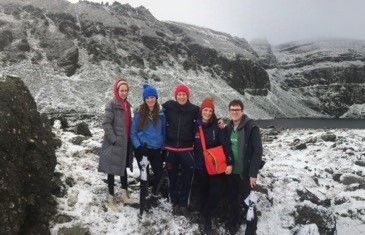