Have you been creative in the kitchen this Christmas? Glued to Master Chef, Bakeoff, Come Dine With Me?

If you fancy the idea of spending a year learning some kitchen rules and practicing your culinary craft under the guidance of some of Ireland’s most well-known chefs, a new course has just been announced.

Waterford Institute of Technology has developed a part-time course with Springboard which is open to jobseekers interested in finding work in professional kitchens. The Certificate in Culinary Skills is a skills-based programme designed to equip students for an entry-level job in a professional kitchen.

Course Leader, Judith Hickey from WIT explains why WIT has expanded its range of culinary courses “Already we run a number of courses including the Higher Cert and Hons Degree in Culinary Arts. There is great demand in the sector which is why we have worked with Springboard to develop a course to help jobseekers carve out a career where culinary skills are needed.”

Chef Edward Hayden, one of the lecturers on the new Cert in Culinary Skills, explains how he turned a love of cooking into a career that has seen him display culinary skills on television, as well as teach skills at WIT.

The skills need in the thriving Irish hospitality sector has been highlighted by the Government’s Expert Group on Future Skills Needs’ report ‘Assessment of Future Skills Requirements in the Hospitality Sector in Ireland, 2015-2020’ which identifies a significant skills shortage for the coming period in trained craft-level culinary employees. This need has also been recognised by the Irish Hotels Federation (IHF) who, along with the Irish Hospitality Institute (IHI) and Fáilte Ireland, launched, in 2016, a National Tourism Careers programme to attempt to attract more people into working in the tourism and hospitality sectors.

Applications for the Certificate in Culinary Skills are being taken until 9th January, with the course scheduled to start on 16th January. Apply online on the course page at: https://springboardcourses.ie/details/4653 or www.wit.ie/springboard 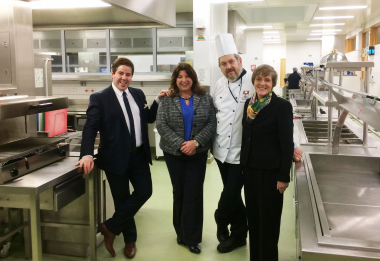