WIT graduate Shane Wallace spoke to Irish Building magazine about his experiences, work and what he has discovered while working in New York City

What experience did you have before moving to New York?
The only real construction experience I had was when I was working with Turner during my Waterford Institute of Technology work placement in 2009. I was based in New York for nine months working at East River Science Park – a 20 storey medical research campus on the East Side of Manhattan. Aside from this, the technical knowledge I had learned during my first three years in WIT was the only real experience I had.

I think the course provides a good foundation for any young professional starting out in the construction industry. Having studied these various different topics – it helps give you confidence that you can hold your own when you come across it in a work environment. The nine-month work placement was also a great way to get exposure to what the industry is like.

Why did you choose New York instead of Australia and Canada, other popular destinations for the Irish in the past decade?

Having had the work placement experience of working with Turner and working in New York, I had always hoped to go back once I completed my degree. I came out of college in 2011, just when things were starting to pick up in the industry globally and luckily enough timing worked out that Turner had recently won a couple of large projects. I was hired full time in August 2011 just as the master’s degree was finishing up - so I actually finished the course from NYC. I had considered Australia and Canada but as I mentioned above timing just worked out with Turner and I would be working with a lot of the people I had previously worked with – so it was a nobrainer

Can you tell us about your work as Procurement Agent and your previous roles with Turner Construction Company?

The procurement agent role is one which I have recently taken on. Still getting my feet wet! The main responsibility is to manage the process of awarding work packages to subcontractors and vendors for specific projects and ensuring they are awarded on time to meet the construction schedule. Prior to that, I spent 5 years onsite coordinating sub-contractors to install work per the drawings and specifications and ensuring the project remains on budget and schedule. I was responsible for various different trades over the years such as steel, concrete, curtainwall, mechanical, electrical, plumbing, masonry.

Please tell us about the projects you have been working on?

When I first started in 2011, I was assigned to a 40 storey commercial building in Midtown Manhattan – 250 W55th Street. The project was an interesting one for me as it gave me a chance to see a project from the beginning all the way through until the end. I spent 3 years there and learned a lot from a good team.

Following this, I spent a few months doing some hospital renovation work at Mount Sinai Beth Israel. It was an active hospital so there was obviously a huge emphasis on patient safety and wellbeing during the construction work. This was another interesting job as it required a huge amount of pre-planning prior to doing any work.

In January 2015, I started working at ‘B2 Atlantic Yards - Brooklyn’. This was a particularly interesting project as the design focused on a huge amount of prefabrication and modular construction. The majority (+/- 90%) of the work was built offsite in factory conditions, trucked to the site and picked with the crane into place. It was 34 floors of residential apartments and it’s actually the tallest full modular building in the world. Something like this had never been done in construction (which is pretty uncommon) so it was great to be involved and I learned a lot from that one.

I’ve now been working on the MSK David H. Koch Centre for Cancer Care for the past two months. The job itself is a 760,000 sq ft outpatient treatment facility on the Upper East Side of Manhattan. My day-today responsibilities include procurement, material tracking and on-site construction management.

What has been the hardest thing to adapt to in NYC?

I didn’t really have many issues adapting to life in New York. Obviously, you miss family and friends so for me I would say that was the hardest thing. Luckily enough though NYC is a 6-hour flight away so I go back at least once a year and people visit on a regular basis – so overall not too bad.

Did you acquire any new skills working in NYC which may not have been achievable at home?

I wouldn’t say that I have received better knowledge and skills than I would have in Ireland necessarily. What I do think is that I’ve been lucky enough to see the scale and diversity of some of the projects which NYC has. It is hard to find anywhere else in the world that exposes you to such a large amount of construction projects in such a small area.

Have you met many other young Irish construction professionals working in New York?

When I first moved here, a couple of my classmates in college had already been working here for the best part of a year so that was nice. They were working for predominantly Irish companies so through friends of friends/coworkers we have a good network of young Irish professionals and regularly meet up and do a few trips here and there so that’s nice.

What roles do they have?

The roles they work in vary from on-site construction management to estimating and even a couple on the client/development side of things. We were all in the same boat between 2008-2010 where things looked bad coming out of college – but luckily enough New York gave us all careers which is great to see.

How do the Irish compare to their American counterparts, specifically construction management graduates, with regards knowledge and skills?

It’s hard to do a comparison in terms of knowledge and skills. What I will say is that I’ve been fortunate enough to work with people from various different backgrounds and skillsets – again it goes back to the diversity and scale of the NYC construction industry. Each new project you get to work with different people and it’s good to be able to see how other people do things and the methods they use. It’s nice to be able to pick up these skills/knowledge from others and to keep learning every day.

Do you know of young professionals considering coming back to a recovering Irish Construction Industry, and what could be done to incentivise Irish professionals to return home?

From what I see it looks like the Irish Construction Industry is slowly recovering. I saw the CIFJobs.ie recruitment advert on Irishbuildingmagazine.ie seeking skilled tradespeople to support the construction that is being projected over the coming years. It’s good to see organisations like this having something positive to say, with the last few years being so bleak. If positive news keeps coming out, then I think it would start to get people considering moving back. The construction industry by its nature is cyclical – which can be seen in its ‘boom/bust’ trends over the last 40 years. It’s starting to look like the ‘bust’ has past and it’s gearing up to get back on its feet. This in itself to me is the main driver, if the work is there and people want to come back, then it will work out.

Have you any advice for course providers here as to what to equip their students with?

I think a syllabus similar to that at WIT is a great starting point for any college graduate. It covers a broad range of topics and gives you a flavour of the various different roles you may be asked to step into once you start in a working environment. I think that course providers should try to make graduates flexible so that they have no fear of stepping into any role once college is done.

Your MSc dissertation was on Building Information Modelling (BIM) & Integrated Project Delivery (IPD). Are BIM, Lean, and Green Construction big topics in New York and are clients demanding them?

They are huge topics for Turner and not because clients are demanding them but that they help us be better builders. BIM co-ordination is on almost every job and the benefits are huge. We recently just completed our first true IPD job in New York and I’m sure it won’t be the last. Sustainability is a big topic also but in recent years Lean Construction has been a huge focus for the company. In my opinion, I think Lean can change the game on how we build. With all these topics pretty much standard operating procedure in Turner – it makes us more attractive to clients and one of the industry leaders in promoting these topics.

The Irish Abroad series of interviews presents readers with a view of what the Irish in construction are doing abroad and the knowledge and skills they are gaining. It also shows what could be obtained by bringing these people back to Ireland to improve our construction industry, overall economy, and society. In the past decade, many Irish people have gone to the UK, Australia, Canada, and the United States and have received significant experience working on large-scale projects. Shane’s interview reminds us of the ability and experience of the Irish working abroad. We will continue our interviews with Irish professionals working in construction around the world.

This was first published in the Irish Building Magazine and reproduced with permission. 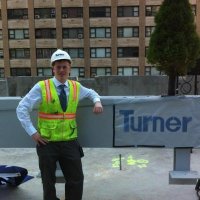