Nine reasons to stay in love with Waterford

Whether you’ve known the city all your life or are thinking of it as a study location, Waterford will keep a piece of your heart

From ‘best place to live’ to being on the international places to see hot lists, we explain why you’ll not only fall in love, but stay in love with Waterford.

Waterford has been mentioned in a number of online and newspaper articles on places to visit. Here’s seven to whet your appetite for Waterford.

Waterford has also welcomed some high-profile tourists in its time too.

Announcement: The Prince of Wales and The Duchess of Cornwall will visit Waterford and Tipperary#RoyalVisitIreland ����������@ClarenceHouse - @dfatirl pic.twitter.com/aZtMdhuM8a

One of the best things to happen Waterford in 2021 was the ‘Best Place to Live in Ireland 2021’ title. Find out why Waterford city won:

Best Place to Live in Ireland 2021: Why Waterford city won

It’s not the only nod to Waterford’s ‘liveability’. Earlier in 2021 Waterford was the top county in the Liveability Index:

Waterford tops table of most 'liveable' counties in Ireland

From 1 May 2022 when South East Technological University is established, Waterford joins the ranks of cities that can claim the title ‘university city’. The new university will be central to enhancing what is already a vibrant economic, social and cultural environment.

One of the highlights for many of our students with access to a car or the bus route to Tramore, is the ability to nip out at lunchtime or after class to the beach.

While Tramore may be the most well-known beach in the county, the choices within half an hour of campus are many: Woodstown, Dunmore East, the Copper Coast to name but a few.

Waterford city is on an upward trajectory and on track with the ambitious vision outlined for it in Ireland’s national development plan.

Ireland’s oldest city, it also promises to be Ireland’s brightest and most dynamic city with new, innovative industries creating great opportunities for students and graduates.

Innovation is the common theme that brings together public, private and academic partners within the Waterford City region.

Find out more about the culture of innovation in Waterford: https://t.co/kVZaiLixf9 pic.twitter.com/1TJkwcXbHc

Its recent accolades including university designation and best place to live are turning heads and attracting foreign direct investment.

What other university gets its locale spruced up every year before the start of each academic year? The Waterford Walls festival, which usually takes place over the summer months, is an international street art festival. Each year new sites are added which means the city gets more vibrant year-on-year.

Students love Waterford because it had the familiarity of a small town combined with the expansiveness of a big city.

It has the nightlife, the culture, the shopping and the amenities of a city without being to sprawling. Plus it's filled with historic and cultural gems from the Viking Triangle to the Cultural Quarter to the Apple Market.

From the Waterford ‘blaa’ to its integral role in the history of rashers and crackers, Waterford has a long heritage in food.

This has extended into popular food festivals as well as top notch restaurants and casual nosh options.

Not only has Waterford county its own 46km greenway, Waterford city will be connected to a new South east Greenway running through Co Kilkenny onto New Ross in Co Wexford.

Even better news for city students is that Waterford has been added to the list of cities where Transport for Ireland bikes stations are located around the city to help people get around. A number of the stations (set to open in mid-2022) are on or adjacent to our campuses. 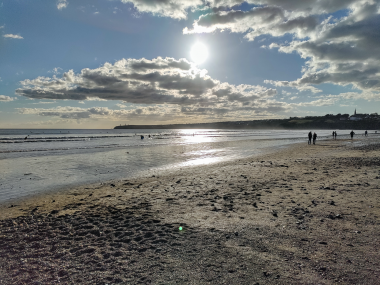