There is good news for anyone interested in getting that vital start to working in the television and media industries. The award-winning Higher Diploma in Arts in Television and Media Production commences again in autumn 2021 with an exciting and innovative blend of practical workshops and online classes delivered through block-release.

The course leader Dr Moira Sweeney says: “The seven-month post-graduate course is uniquely tailored to the needs of students and is particularly suited to those who wish to develop their skills while also working”.

The Údáras na Gaeltachta supported course is highly regarded in the media sector and has an excellent employment record. Graduates go on to work in TG4, RTÉ, the BBC and in top companies such as Tyrone Productions, Nemeton TV, Independent Pictures and Magamedia.

“The industry-focused nature of the postgraduate course attracts participants from all over Ireland who are keen to avail of practical workshops which are led by film, television and radio professionals with extensive experience,” Moira says.

Helena Keane who has worked on Ros na Rún and Seal le Dáithí since leaving the course says “I had no media experience at the start of the year, but the emphasis on practical work meant I gained enough hands-on experience to set me up for working in the industry right after the course”.

Photographer and filmmaker John Foley has not stopped working since he completed the course: "Using the film production and editing skills that I learned on the Higher Diploma in TV and Media allowed me to set myself up as a Digital Content Creator”.

The high-quality dramas and documentaries are regularly broadcast on TG4’s series Céad Seans | First Chance and they also achieve recognition at festivals around Ireland.

As a result, graduates are excelling in their careers

Moira says “it has been a record year for the Higher Diploma at the National Student Media Awards 2021 with twelve nominations and three awards across four categories for the students’ imaginative and compelling films,

“Graduates from this year are already working in the industry in key editing, production and directing roles.”

There will be a Virtual Open Session to answer any questions on Thursday, 26 August from 6.30-7.30pm. Full details can be found on the events section or pre-register at mailto:[email protected] 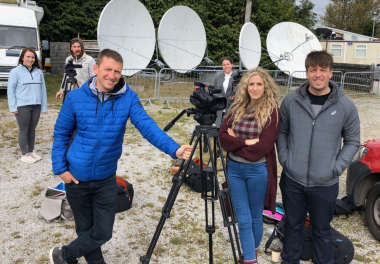