WIT staff and students were delighted to hear the story behind the painting from Vincent Devine and what inspired David Brennan to purchase the painting. WIT raised over €4,000 on the day for two local charities close to Vicky’s heart – the Solas Cancer Support Centre and The Shona Project.

Tracy McDaid, Manager from the Solas Cancer Support Centre remarked after the event: “The professionalism and attention to detail to the whole morning was second to none. When something looks so smooth it means a huge amount of work went in behind the scenes and that showed today. We were honoured to be with you to share International Women’s Day and to be one of the recipients of the funds raised. It was a complete surprise and much appreciated.”

Tammy Darcy, Founder of the Shona Project said “As a former WIT employee it was such a privilege to be invited back to WIT and share the impact of our work. WIT has been a huge supporter of the Shona project over the last five years.  The fact that all the staff got behind this initiative and that Vicky Phelan chose the Shona Project as a recipient for the fundraising of this initiative was a huge deal for us. Vicky has been an advocate for the Shona project over the years and supports the education and empowerment of  the girls and women of Ireland. It was a fantastic event.”

WIT also announced the launch of the Vicky Phelan Chair for Equality and Access to Education on the day. Dr Helen Murphy, Head of the School of Education & Lifelong Learning in WIT making the announcement said: “We are here today to create a long-lasting link between Vicky, her family and the Institute. Vicky has not only provided motivation and inspiration to the community of WIT, but also to the women of Ireland and, indeed, to society at large. The Vicky Phelan Chair in Equality and Access to Education embeds values that the WIT community hold dear: strength, courage, determination, resilience, openness, leadership, wisdom, the ability to overcome adversity and a willingness to put aside one’s own personal considerations for the betterment of society.”

Dr Allison Kenneally, Vice President for Equality, Diversity & Inclusion stated that “The EDI office in collaboration with David Brennan and Vincent Devine are already working on a video with Cian O Carrol in Education Services WIT to help advertise the Vicky Phelan Triptych Portrait to support their vision in bringing it to its full potential and we also plan working together for International Men's Day 2022.”

Vincent Devine the artist remarked after the event “The showcase of my portrait of Vicky Phelan organised by the EDI staff at WIT was exceptional. The sophistication and planning of the event was second to none and this meant that I was able to deliver my talk with the ease and freedom that is needed.  The staff at WIT have set the standard for events surrounding the portrait moving forward and I look forward to working with them in  the future to deliver more information sessions and events."

David Brennan, owner of the Vicky Phelan Portrait “When Vicky and I had exchanged similar ideas of what could happen with the portrait and how it could take on a life of continuing Vicky’s campaign of awareness, I had imagined, following its inaugural public display in Mooncoin, that it would be very fitting to have the portrait displayed at WIT and to be experienced by colleagues and friends of Vicky as well as students and employees also. When Anne Murphy from WIT’s EDI office contacted me to ask us about having it at WIT,  I jumped at the opportunity and very quickly we saw a huge undertaking from the specially formed committee to help create such a beautiful and memorable event. Vicky’s life story, contained within the portrait is emotionally charged and inspiring. The awareness campaign that we envisaged is being made possible through events like this and we hope to be back at WIT again in the future.” 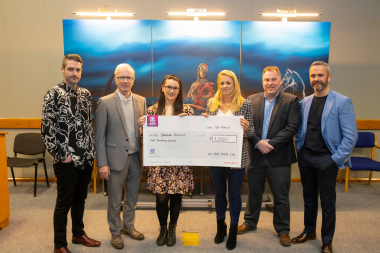 The social club also presented cheques on the day