Paul Clogher on cinema and the ambiguities of Mission

Paul Clogher, a lecturer in Theology and Religious Studies at WIT, discusses the short-lived mercy of men: cinema and the ambiguities of the films 'The Mission' and 'Black Robe'.

The spread of Christianity in the wake of colonialism often entailed the oppression, and sometimes even destruction, of indigenous peoples. At the same time, the missionary tradition gives us some of Christianity’s most charismatic figures. This contradiction, perhaps, makes mission a fascinating theme for filmmakers. Missionaries are often heroic or even anti-heroic figures. They are challenged by the unknown or exotic and lead lives of courage, self-sacrifice, and sometimes quiet desperation. Cinema, too, provides an expansive landscape where these themes are explored. More often than not, films about missionaries reference more contemporary issues within Christianity and the legacy of missionary activity. Two modern classics offer powerful, though contrasting, examples of this dynamic and show how the history of missionary activity matters to the present as much as the past. At its core, the missionary impulse is born in the need to seek out what is different in ourselves. It thrives in that urge to know and explore other ways of being human. Likewise, the cinema screen shows us other worlds, other forms of life. That need to see, then, may well be the common space where cinema and notions of mission meet and, on occasion, clash.

Even if you never watched Roland Joffé’s The Mission (1986), you might be familiar with Gabriel’s Oboe, Ennio Morricone's celebrated and moving melody. Joffé integrates this piece into the story through a first encounter between Father Gabriel (Jeremy Irons), a Jesuit missionary, and a suspicious group of Guaraní tribesmen in South America. While the tribesman react badly to the oboe’s strange sounds, the scene marks the beginning of a relationship between these two groups who, at first glance, have little in common. Gabriel is portrayed as the ideal missionary. He integrates himself into the Guaraní community, taking into account their customs and traditions. Convinced of his faith, he equally has a ferocious sense of social justice. Part of the story deals with Gabriel’s polar opposite, Mendoza (Robert De Niro), a ruthless slave trader who joins the community to do penance after murdering his half-brother. Eventually, he takes vows and joins the order. Ecclesial and imperial politics intervene to threaten the mission but Gabriel and his companions defend their community to the last, eventually paying with their lives. The Mission is set sometime around 1758, when the Guaraní were defeated by the European colonialists. The Jesuit order was itself suppressed not long after. The film was released in 1986, just as the Vatican began to issue directives against the liberation theology movement. Gabriel’s missionary community, with its emphasis on shared living and communal wealth, may well be a reference to this more contemporary struggle within twentieth century Christianity. The Mission, perhaps, is not really about the eighteenth century, or indeed any century, but an ideal missionary community. On the one hand, it is somewhat sentimental and mourns for a lost opportunity, yet, on the other, draws on the world of 1980s Christianity to hint at a better way, a sense of mission that looks beyond the uneasy alliances of churches and empires.

Black Robe (1991) takes us a long way from the swashbuckling, and romanticized, world of The Mission. Based on Brian Moore’s novel, this film tells the story of an earnest French priest, Father Laforgue (Lothaire Bluteau), tasked with reinforcing a Jesuit outpost on the fringes of seventeenth century Quebec. Friction takes hold, however, as Laforgue’s rigid view of salvation leads him into conflict with his fellow travellers. Likewise, they begin to suspect him, the eponymous ‘black robe,’ of being a sign of misfortune, a demon. The young pastor's understanding of mission focuses entirely on the notion of individual salvation. The natives require saving grace and have no access to any authentic spirituality or ethical life within their own traditions. This takes us into the wider conflict of Black Robe. The French and their missionary allies appear insensitive, arrogant, and ineffective in their pursuit of Christianization. The journey upstream deconstructs Laforgue’s heroic and saintly notions of mission. He craves martyrdom and purity but lusts after the Algonquin leader’s daughter. In the end, almost with resignation, he appears to accept the validity of their beliefs. Black Robe makes a necessary statement about Christian missionaries and the clash of cultures. It may take a negative, almost bleak, view of mission but raises questions that have dominated the Christian relationship with religious diversity for centuries. When Christianity aligns with the state, does it construct inauthentic, oppressive structures of authority? And instead of speaking all the time, could Christianity listen and learn something new or unknown about itself from those left outside?

Our two Jesuits represent a clash of cultures, a battle between two ‘Christianities.’ Gabriel sees the Guaraní as a nascent Christian community. His attitude seems more reflective of twentieth century Christian thought than that of his own imagined time. His courage and determination endear him to viewers but the film, too, hints at a bigger question. The Jesuit mission brings tragedy. In spite of their best efforts, the community becomes the target of imperial oppression. Would the Guaraní, then, have been better off if the Jesuits had left them alone? The Mission leaves this question open to viewers. Black Robe, contrastingly, offers no assurances and takes an ultimately sceptical view of Christianity. When one of Laforgue’s guardians, Chomina, lies dying, the priest asks him to accept baptism. He refuses and awaits the She-Manitou, who will take him to the spirit world where men’s souls hunt the souls of animals. In the next shot the She-Manitou appears as a beautiful woman, thus vindicating his refusal.

Both director’s link their stories of the past to more contemporary questions regarding the relationship between Christianity and culture. Gabriel and Laforgue represent two theologies, one inclusivist the other more exclusivist. We equally see a contrast in the depiction of the native peoples. In The Mission, the Guaraní are receptive to the missionaries. Black Robe, contrastingly, paints a picture of hostility. The Iroquis, Algonquin, and Huron tribes are intellectually superior to their ‘pastor.’ In both films it is clear that the native peoples’ beliefs and practices share some similarities with Christianity. For Gabriel, this is a strength but Laforgue treats it as an irrelevance. Of both films, The Mission comments on contemporary theological issues. By depicting the Vatican Emissary’s shock at their communal lifestyle, Joffé draws parallels between the Jesuits and the liberation theologians of the 1980s. Gabriel and Lagforgue are tragic figures. At the end of Black Robe Laforgue baptizes the Huron tribe but the epilogue text tells us that within fifteen years they were routed and killed by their rivals. Loving their enemies came at the cost of their own existence. Likewise, The Mission concludes with the Portuguese attacking the community. In a poignant final shot, a band of children collect what is left of the mission and flee. Neither filmmaker gives us a wholly idealized vision of mission. Even in its more sentimental moments, The Mission retains that sense of impending tragedy. Perhaps the fate of both missions is summed up best by the Vatican Emissary as he recounts the Guaraní’s tragic fate: ‘So it was that the Indians of the Guaraní were brought finally to account to the everlasting mercy of God – and to the short-lived mercy of men.’ 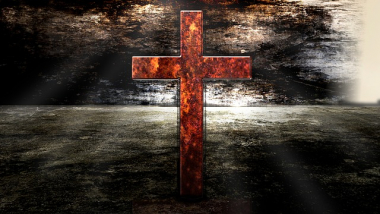