Emma Kearney is a mature student in her second year of studying BSc (Hons) Pharmaceutical science. Emma received the Philip Kelly Teva Excellence Undergraduate Scholarship, funded by Teva Ireland, which aims to support an excellent undergraduate student during their studies in WIT.

What have you done in life prior to studying here?

I was an actor who specialised in theatre and live performance, I had studied under the Gaiety PTC course and the Bow Street screen acting academy in Dublin and have been involved in over 30 productions during the course of my career in various roles ranging from acting to stage management, direction and even one production as lighting and sound design. I also make it my business to volunteer for the Spraoi parade every year in August.

What was your motivation for choosing this course?

Although acting is a passion, it’s also an extremely tough industry to support yourself financially, particularly for the likes of theatre practitioners. It became obvious to me that it was no longer sustainable given the current financial climate so I made the decision to go back to college and retrain into an industry that would allow me to support myself. I also wanted to study something that interested me, something that would continue to challenge me and would never run out of material to work with or learn from. The obvious choice was science and I chose pharmaceutical science within that as it had an emphasis on chemistry. I believe Arts and Science to be intrinsically linked, they both deal with telling the story of what is around us and how we react to them, the tools are just different.

What attracted you to study at Waterford Institute of Technology?

I am from Waterford originally and was always aware of WIT, many of my friends studied here after school and always remarked positively about their experiences here. I also wanted to stay local as it’s hard to fully assimilate into student life initially when you are ten years older than the average student. There is also the fact that Waterford has a huge pharmaceutical presence in terms of industry, it seemed like a Goldilocks moment.

How has this scholarship benefitted your study in WIT?

This year in particular was extremely hard, Covid-19 restrictions meant that the vast majority of classes and assignments were done at home. My previous laptop was from 2012 and I wasn’t able to afford another one, which made it a lot more difficult to perform as I would have liked. Being awarded the scholarship allowed me to get the best laptop for my needs and has already made it easier to engage with the work. There is also an element of confidence and incentive boost from receiving it. I was always aiming to do the best I can but this has lit a fire of motivation under me, it certainly makes it a lot easier to learn and engage when you believe yourself capable of doing so. It’s a huge honour to be the first recipient of this scholarship and I’m very grateful for this opportunity. I’m only in the middle of my WIT journey and I’m enjoying every moment! 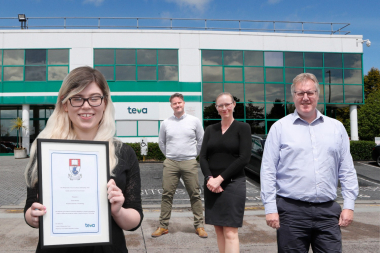