Two collaborative projects involving the PMBRC have been approved for funding as part of the Pharmaceutical Manufacturing Technology Centre (PMTC).

Two collaborative projects involving the PMBRC have been approved for funding as part of the Pharmaceutical Manufacturing Technology Centre (PMTC). Funded by Enterprise Ireland and the IDA, the PMTC aims to address a number of manufacturing challenges experienced by Irish-based pharmaceutical companies. The PMBRC, along with collaborating groups, proposed two projects to the industry-led evaluation panel, both of which were approved for funding. The first project involves the rapid detection of microbial contamination in pharmaceutical samples and is a collaboration between the PMBRC and the Microsensors for Clinical Research and Analysis centre (MiCRA), IT Tallaght.

To protect the patient, pharmaceutical regulations apply strict limits to the levels of microbes which can be present in pharmaceutical products. Consequently incoming raw materials, finished product and processing equipment must regularly be tested for microbial contamination. “Currently microbial analysis is very slow” explained Dr. Panagiotis Manesiotis, a senior postdoctoral researcher in the PMBRC who will lead the work in WIT. “You need to take the sample and incubate it in agar for up to 5 days before you can visually see if there are any microbes growing on the sample. In the meantime batches of material remain in quarantine or equipment lies idle while you are waiting for results – it’s very inefficient. What industry want is a rapid technique where you can tell within hours whether there is microbial contamination on a sample”. This project aims to link smart polymers developed in WIT which can selectively bind microbial cells with sensor technologies developed in IT Tallaght which can detect that binding.

The second project will study the use of dry granulation technologies in pharmaceutical manufacturing and is a collaboration between the PMBRC along with the School of Pharmacy in UCC, the Department of Chemical and Biopharmaceutical Engineering in Cork IT and the Centre for Advanced Photonics and Process Analysis (CAPPA), also in CIT. “Granulation is the process of converting fine, cohesive powders into free-flowing particles which can be readily processed further into tablets, capsules and sachets.” explained Dr. Niall O’Reilly, Centre Manager at the PMBRC who will be responsible for the WIT elements of the project. “Traditionally this has been done using water or organic solvents but these have to be removed after granulation which can be slow and expensive. Also granulation processes tend to be carried out in batches but there is a move away from batch production to continuous manufacturing technologies which are less labour intensive and more efficient”.

This project will study roller compaction initially, a process whereby powders are compressed between rollers into granules on a continuous basis. The two projects will commence in December 2012 and will be funded for 12 months initially. However if preliminary results are promising, the work may be extended by a further four years. The PMTC will involve 26 multinational and indigenous pharmaceutical companies as well as 7 third level institutions.

Pictured: Dr. Panagiotis Manesiotis, co-Principal Investigator on the rapid microbiological analysis project, explains the principle of molecular imprinting at the PMBRC Analytical Forum in May 2012. 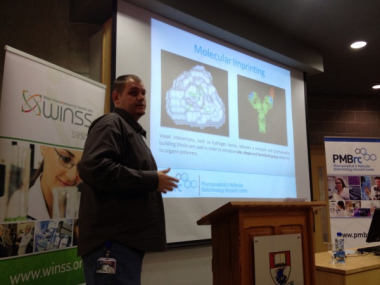