Premiere of the next wave of Nemeton and WIT filmmakers

Films by class of 2019 postgrad students will be screened for family, friends and the public at the SGC Cinema in Dungarvan on the 15 May 2019 at 1pm

Exciting times lie ahead for the students of Waterford Institute of Technology’s Higher Diploma in Television Production.

This postgraduate course in television and digital media production is run by the Waterford Institute of Technology in association Nemeton TV, one of Ireland’s leading production companies, and Udarás na Gaeltachta.

Following in the footsteps of former graduates of the course, this young group of filmmakers hope to win awards and have their work broadcast on TV and screened at some of Ireland’s best film festivals.

And most importantly, they can look forward to employment in a vibrant industry that needs their skill set. Based at Nemeton TV in the Ring Gaeltacht of Co Waterford, the students have completed an array of imaginative dramas and documentaries.

Once again, the films will be screened for family, friends and the public at the SGC Cinema in Dungarvan on the 15th of May at 1:00pm. And there are some really exciting films on show this year.

Well known Waterford based photographer  John Foley has made an intriguing documentary called ‘Díoltas’. It is based on the brutal kidnapping, imprisonment and eventual execution of RIC District Inspector Gilbert Potter by the IRA in 1921 during the War of Independence. The film illustrates Potter’s last arduous days spent in safe houses amidst the dramatic backdrop of the Comeragh mountains. Locals who have familial and historical connections to the events narrate the true story, which adds a personal element and a deeper perspective to this gripping documentary.

Well-known young Clare musician Caoimhe Morrissey and Cork native Andy O’Leary explore the power of music therapy in their heart-warming documentary ‘Guth An Cheoil’. James  lives with Down Syndrome and in this documentary, we go on a moving journey with him and his family and discover how much music therapy has benefitted all of their lives.

An Seanléim by Kevin Daly

Dungarvan hurler Kevin Daly explores the devastating impact of injury on young players in his illuminating documentary ‘An Seanléim’. When former Cork minor and U21 hurler Aaron Ward tore his cruciate ligament, he thought his sporting career was over. The documentary explores Aaron’s fears for his future in sport, the challenges he faced mentally and physically and the steps involved in his comeback from this crushing injury.

Laura Coady from Waterford and Eannaí O’Sullivan of Cork have linked up together to write, produce and direct their own sit-com drama ‘Cara Nó Namhaid’. Two college students with very different personalities are forced to live together  and to make matters worse share the same bedroom. Will these girls  ever become friends? Or will they end up with nothing more than a bitter relationship and a longing for personal space?

Cillian MacGabhain from Mullingar has created a fascinating programme ‘Bígí Sibh Féin’ in which he explores how writing and performing music and stand-up comedy have helped him to see the world from a different perspective.

Helena Keane from County Meath has finally been able to realise her dream of making comedy. Her skit ‘Nuacht Nocht Anocht’ is a mock current affairs programme in which the panelists discuss satirical and farcical topics in a hilarious way. Helena’s wit and flair for comedy-writing shines through in this entertaining programme.

Waterford artist Amii McGuinness explores the world of Paganism today in Ireland in her eye-opening documentary 'Págánach'. Amii travels the country and poses the questions: Is Paganism still alive in Ireland today? And what motivates a Pagan to choose this path in life? The documentary was created in a bid to help people understand: Pagan beliefs, music , history and rituals.

In ‘‘Oglaigh Rojava’ Waterford native Leo De Moinbhíol provides a unique and revealing insight into a huge revolutionary project currently taking place in Kurdistan in Northern Syria. Irish people and other international volunteers have joined the Rojava revolution against ISIS to fight for the rights of oppressed Kurds. In this captivating documentary, we meet these volunteers and find out what inspires them to help others in such dangerous territory.

This course is widely regarded as the most industry-focused course in the media sector. The core belief is that third level course is relevant, dynamic and genuinely prepare students for industry. “Step by step, our students are equipped with the necessary skills needed to not only complete their projects but to learn about all aspects of the media industry,” says Course Leader, Moira Sweeney.

The course has gained a high profile in the media industry and has an excellent employment record among course graduates.  Films produced on the course have gone on to win Best Irish Language documentary at the National Student Media Awards every year since 2014. 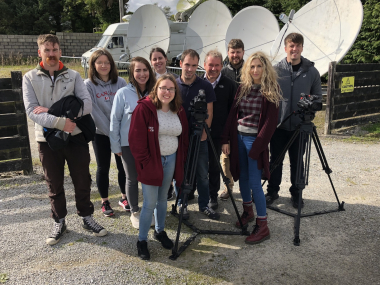