Dr Una Kealy is a researcher in theatre and literary studies. Questions of identity, marginalisation, social inclusion and exclusion drive Una’s current research interest in the work of local theatre practice and playwrights in the South East region and in considering how women's lives and experiences are explored and expressed in Irish theatre. Her research interests are focused in furthering the ‘Performing the Region’ research project in the School of Humanities. Una has been closely involved in developing strategies for accessing, cataloguing and developing the WIT archival holdings in the area of regional theatre as part of this project.

Una's presentation at Research Sparks provided a brief overview of a book chapter currently in draft for a publication entitled Irish Women Playwrights and will focus on how performance artist and theatre maker Amanda Coogan adapted and staged an adaptation of Waterford playwright Teresa Deevy's play The King of Spain's daughter.

In recent years Una has researched and published on the work of playwrights Jim Nolan, Billy Roche, Teresa Deevy and Red Kettle Theatre Company. A current research project entitled Performing the Region: Performing Women focuses on how women playwrights in Ireland throughout the twentieth century articulated women's lived experience and experimented with theatrical form and further investigates how the Abbey Theatre interacted and supported the work of women playwrights during the 1900s. This research is allied to an investigation into the historic and contemporary nature of gender equality in Irish arts organisations and particularly theatre organisations and aims to contribute to shaping future policy and practice in the arts to enhance equality of participation in Irish cultural life by female, transgender and male theatre practitioners.

Una’s current research, co-authored with Kate McCarthy, interrogates the choices made by Amanda Coogan in collaboration with Dublin Theatre of the Deaf in the 2017 adaption of Waterford playwright Teresa Deevy’s The King of Spain’s Daughter staged as part of the Dublin Theatre Festival. The production, Talk Real Fine, Just Like a Lady, can be regarded as an important moment in Irish theatre practice in that it was designed to be equally accessible to deafened and hearing audiences and constituted one of the few productions staged by the Abbey Theatre Amharclann na Mainistreach in 2017 where women assumed the majority of creative and technical roles. Little research exists into theatre created for deafened audiences by Irish theatre practitioners and an in-depth analysis of Talk Real Fine, Just Like a Lady does not exist: this research is, therefore, both timely and important in the context of Irish theatre research.

The study considers how directorial vision, collaborative authorship, design and ensemble practice combine to expose the exclusions of theatre practice that prioritises spoken language. Additionally, the essay analyses how language-based texts can be transposed by gesture, image and sound design to become adaptations that reinvent the original text and simultaneously reflect on the wider socio-cultural environment from which that original text emanated. Analysing aspects of the 2017 production of Talk Real Fine, Just  Like a Lady; interview data with Amanda Coogan; analysis of original Abbey Theatre Amharclann na Mainistreach productions of Teresa Deevy’s work; and critical commentaries on Deevy’s dramatic texts, specifically The King of Spain’s Daughter, the research will contribute to theory on theatre practice that creates theatre experiences specifically for deafened and hearing audiences and will be of interest to those involved in the study and practice of theatre, Irish theatre and gender studies within Irish theatre.

In addition to academic publications her research takes the form of rehearsed play readings, practical workshops, public interviews with professional theatre makers and collaborative partnerships with cultural organisations both regionally and nationally. 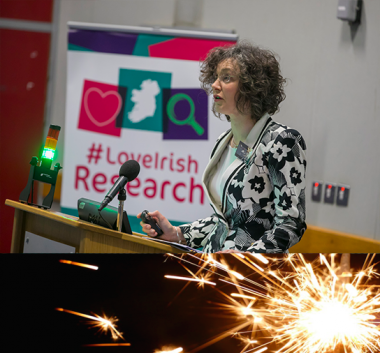