Having spent most of his life involved in show jumping, Padraig returned to college as a mature student, thinking there was more to life than horses. Aged 26 he was offered a place in 2003 on the WIT Degree in Business Studies with German.

Padraig had already picked up German through his showing jumping apprenticeship; and so combined it with economics and finance for a four-year degree at the Waterford Institute of Technology.

In second year he went to  Augsburg Germany on his Erasmus year. He then transferred to the University in Bern Switzerland for two years and returned to do his final year in WIT, graduating in 2008.

“Before going to college I was a professional showjumper, but was keen to broaden my horizons and knew that WIT had a very good reputation among employers. While at college I more or less stopped competing and only rode a little bit at home occasionally. I live at my parent's place in Grangemockler, and travelled in every day,” he said.

“I had a fantastic time at WIT and having studied in Germany and Switzerland I really enjoyed the relationship between teachers and students that I experienced in WIT.”

He began a masters programme that autumn when offered a scholarship which developed into a PhD which focused on Bankruptcy laws in Ireland, completing in 2014. His work on Bankruptcy and Insolvency Systems has published well since finishing, but a chance encounter led him back to horses.

Although funded through the HEA TSR Strand 1 programme, with a top up grant from the WIT AIB Centre for Finance and Business Research; he topped up his student stipend by buying and selling horses; falling in love and marring one of his clients, Lucy Wiegersma. Lucy led him back to horses, but switched allegiance from show jumping to international eventing only three years ago. 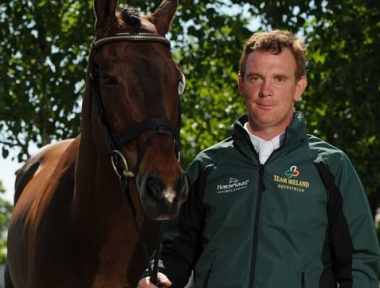