Golfer Rory McIlroy’s charitable foundation, the Rory Foundation has donated STG £120,000 towards sponsoring the Victory Scholar Programme which WIT partnered with in 2015. The £120,000 which the Rory Foundation has donated will go towards sponsoring 2016/2017 Victory Scholars, who are carefully selected primarily from US colleges.

Through its Victory Scholar programme, Sport Changes Life gives accomplished student-athletes the opportunity to act as sport mentors to help build self-confidence and inspire, improve life skills and empower youth to use sport as the catalyst to drive change in their lives.

In a statement on the partnership Rory McIlroy said: “I’m delighted that my Foundation is able to support children and young adults through the Sport Changes Life programme. It’s great that the programme’s Victory Scholars come to Ireland to develop their skills while assisting local community outreach initiatives.”

WIT, which sponsors academic fees and accommodation for the Victory Scholars, has become key to the community outreach aspect of the programme. As part of the Sport Changes Life Victory Scholar Programme, the scholars undertake community work.

In September 2015 two US graduates and basketball players Jazmen Boone and Katie Fox were placed in WIT through the programme and dedicate numerous of hours coaching for the Maxol WIT Waterford Wildcats and Mercy Secondary School. Katie is studying the MSc in Business, Innovation, Technology & Entrepreneurship and Jazmen is completing the MSc in Global Financial Information Systems.

They also participate in the breakfast club at Mount Sion Secondary School in the morning and volunteer at Saint Saviour’s National School.

Dr Michael Harrison, Head of School of Science and Computing at WIT played an integral part in setting up the relationship between WIT and Sport Changes Life.

“The selection process for the Victory Scholar Programme is rigorous. Those selected are all former collegiate athletes who demonstrated high academic achievement during their undergraduate studies, combined with a clear passion for giving something back to society through sport.”

The relationship is also putting Waterford and WIT on the map in the US. Through their regular blogs on the Sport Changes Life website and Katie’s blogs on the Education in Ireland website, the Victory Scholars are increasing the profile of WIT and Waterford as a place to study and live.

“WIT’s engagement with the US is on the increase,” he noted. “We are also an attractive option for undergraduate US students looking to visit on study abroad programmes.”

Indeed WIT has welcomed its first two US Fulbright Scholars in the past months. Sponsored by the US Department of State’s Bureau of Educational and Cultural Affairs, the Fulbright Program is the largest U.S. international exchange program in the world.

John Hayes, President of the Maxol WIT Wildcats Basketball Club has nothing but praise for the Victory Scholars programme.

“The club took a major step forward thanks to the connection with WIT. This is the best thing that has ever happened to us. In particular these two individuals have been phenomenal. All the coaches and various schools around have come back to me singing their praises.”

The basketball club has a primary school programme Waterford city and immediate surrounding areas including south Kilkenny The children in particular, he said, are benefiting from the quality of the coaching the two Masters students at WIT do outside of college hours.

The club’s Saturday morning basketball sessions for primary school children has increased from 80 to 110 participants.

As well as coaching, the two Victory Scholars are always studying. “They both want to take academic credit back home with them as well,” he said. 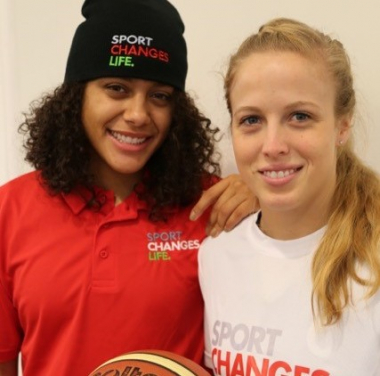