Ross Lewis Michelin Star Guide Mentor 2020 for Ireland and UK, and Co-Founder of Chapter One Michelin Star Restaurant inspires culinary students during his visit to WIT

Ross Lewis was invited to speak to Higher Certificate in Culinary Arts Year 1, Springboard Culinary Course, and B.A. In Culinary Arts, Year 2 and was organised by Jacinta Greene Beatty. When asked why she organised the event, she quoted Antoine de Saint - Expurey saying: "If you want to build a ship, don’t drum up people to collect wood and don’t assign them tasks and work, but rather teach them to long for the endless immensity of the sea."

Ross Lewis did just that, he inspired WIT Culinary Students to aim for Michelin Stars.

Lewis’s career was influenced by people he worked with the likes of Myrtle Allen and Olivier Roulangé. Lewis worked for a short internship with Ferran Adrià who Lewis described as ‘a very creative head chef at eBullie, who saw food as musical notes that he could play’.

Students were surprised that Lewis placed so much emphasis on hobbies when selecting candidates. Lewis stressed the importance of the emotional connection with customers which was second nature to his Co- founder of Chapter One Martin Corbett (now retired) and who won The Face of Irish Hospitality Award 2017. 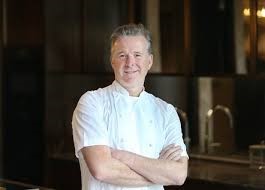