A Lecturer in Business Information Systems at Waterford Institute of Technology (WIT), Dr. Pio Fenton, has been selected as Regional Director of Samaritans for Ireland.

Dr. Fenton’s role is a three year voluntary position which will see him coordinate twenty Samaritans branches on the Island of Ireland as well as leading a team of regional officers in developing the service in Ireland. Charged with responsibility for all operational matters in providing the emotional support service, he will lead more than 2,000 volunteers who support those who are in distress or despair. He will play an instrumental role in the leadership of the organisation across Ireland and the UK.

Dr. Fenton said, “It is my hope that during my time as Regional Director, I will be in a position to strongly influence the national debate on suicide prevention and to ensure that those who need emotional support, for whatever reason, receive it from our organisation or from any other appropriate outlet. They key thing is that people feel comfortable talking.

He continued, “I fundamentally believe that my being in this role will have a positive effect on the emotional support landscape of this country. I am passionate about the type of society we live in and that passion is shared by so many colleagues at WIT. I believe that the society we send our students out into is one which has many faults but these students will play a huge role in reshaping society in the years to come. I hope that, even in some small way, my undertaking of this position plays its part in inoculating students with that mindset.”

Samaritans is an organisation dedicated to suicide reduction in Ireland (and the UK) and has a crucial role to play in modern Irish life. Last year the charity supported over 500,000 phone calls in Ireland and is at the coalface crisis, emotional despair and personal challenges.

Prior to his appointment, Dr. Fenton was Director of the Cork Samaritans since January 2010. A native of Cork, Dr. Fenton has been a lecturer at WIT since 2007. With research interests in Project Management and Operations Management, he has developed with colleagues a new Postgraduate Diploma in Business in Lean Practice which was successfully launched this September. 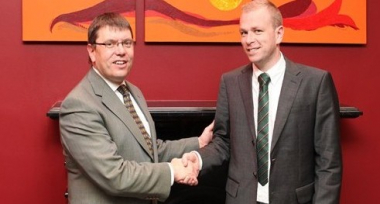