Pio Fenton, a lecturer in Business Information Systems at Waterford Institute of Technology, has been named October Cork Person of the Month to mark his voluntary work with the Samaritans over the past eight years.

In 2007 Pio was promoted to Dep., Director of the Cork branch and responsible for training new volunteers. He took over as Branch Director in 2010, giving over 30 voluntary hours per week and has recently been appointed Regional Director of Ireland, with responsibility for all branches in northern and southern Ireland.

"Highlights of Pio's leadership include achieving a 24 hour service, seven days a week, by his volunteer teams" said Jerry Buttimer T.D., who nominated Pio for the award.

Pio Fenton is a native of Glenville and now lives in Blackrock, Cork said he hoped the award will further promote the work of the Samaritans, which celebrates its 40th anniversary in Cork this year. You can contact the Cork Samaritans by phone on 1850 609090 or you can volunteer to help by taking part in their training courses at 7/8 Coach St., Cork.

"The Samaritans take 500,000 calls a year across Ireland, and the past year has been the busiest in the history of the organisation. We now have 2,000 volunteers in Ireland and in cork we have 200 active volunteers of all ages, and when someone calls, they give no advice, and no judgment, just a listening and sympathetic ear" said Mr Fenton.

Pio Fenton's name now goes forward with the other Persons of the Month chosen this year, for possible selection as Cork Person of the Year, at a Gala Awards Lunch on January 18th 2013, where President Michael D. Higgins will be guest of honour. 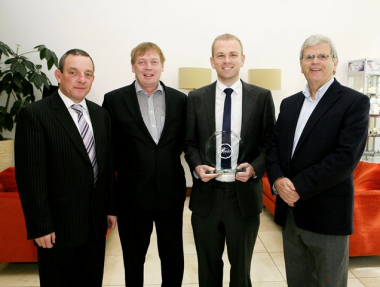