The School of Business at WIT hosted its 12th Annual Recognition of Awards Ceremony on Thursday 9th October.  This Ceremony recognises continuing students with outstanding academic achievement in their previous year.  The awards were called by the Course Leaders and presented by the Head of School, Dr. Thomas O’Toole.  Recognition of student effort and excellence is something the School of Business continually does.  These top performing students can influence others to achieve their potential as peer role models, and the recognition represents a mark of excellence to be included in recipient’s curriculum vitae.

The following are the Awards presented on the night:

The Rowe Medal is in memory of the founding Head of School, it presented to the best performing undergraduate student.  The Rowe Medal was presented by Dr. Mark Rowe, to Ms Louise Murray, whose overall result was highest across the School.  Louise is registered on the Bachelor of Business (Hons) WD048 programme.

This Award was presented by Ms. Linda O Kane on behalf of the combined Credit Unions in Waterford to Kieran Joy – BA (Hons) in International Business.

This award was presented by Mr. Kieran McKeown.  It was presented to the student with the best Management Accounting result for Bachelor of Business (Hons) and BA (Hons) in Accounting.

This award was presented by Mr. Mark Kennedy.  It was presented to the student with the best Financial Accounting result for Bachelor of Business (Hons) and BA (Hons) in Accounting

This Bursary was presented by Ms. Fiona Fleming to the following BSc in Retail Management - WD184 students:

The event was coordinated by Fiona Travers, Fiona can be contacted on 051 302675 or [email protected] 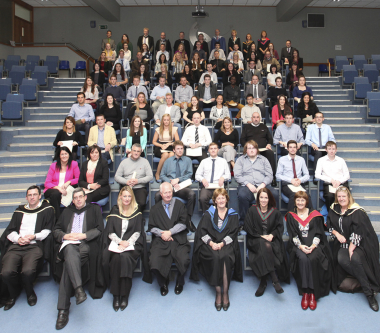