Through initiatives like the Hour of Code, WIT aims to pique interest in second level students that would have otherwise not considered technology

Lecturers from the Department of Computing and Mathematics in WIT visited the Presentation Secondary School in Waterford City to run the Hour of Code, a one-hour introduction to computer science, designed to demystify coding and to show that anybody can learn the basics of programming.

The session, organised in conjunction with Adrian Gibbs Principal, Presentation Secondary School and Ruth Gallen, Deputy Principal, introduced students to the concept of coding in a fun way whilst giving them a sense of what is involved in learning how to code.

By the time the students finished their Hour of Code, which took place in the school’s multimedia computer lab they were starting to develop their very own Star Wars computer game.

WIT’s School of Science & Computing offers a wide range of Level 7 and 8 computing courses including the new BSc (Hons) in the Internet of Things. Last year WIT invested a six figure sum into new labs and facilities using a portion of the dividends WIT earned from the sale of the spin out of TSSG spin-out company FeedHenry which sold in 2014 for €63.5m.

“Through initiatives like the Hour of Code, WIT aims to pique interest in second level students that would have otherwise not considered a career in the technology sector,” explained computing lecturer Dr Drohan.

“Worldwide, there are not enough technology graduates to fill the job openings. In the Irish technology sector, there are approximately 7,000 current vacancies and in continental Europe, there are a staggering 700,000 positions that remain unfilled. This skills shortage comes when a computing graduates starting salary is in the region of €30,000 or more.”

David Forristal, IT Director, SE2 Ireland says that “it is an exciting time with huge growth in the technology sector, with many so opportunities for regional employment in the sector we now need more graduates with programming skills sets emerging from third level education.” 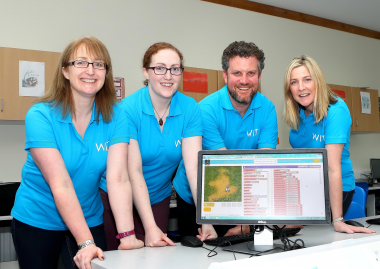