Of the over 140 projects exhibited at [email protected] 2018, the top prize on the day went to Conn Caomhánach, Con Ó Meachair from Meanscoil Gharman, Enniscorthy for their project, [Ag Fiosrú na hEifeachtaí de Phrobhitheacha E.M.(An investigation into the effect of E.M. Probiotics)

Scifest is a regional science, technology, engineering and maths (STEM) competition for secondary schools that takes place across Ireland every year. [email protected] saw more than 330 students from schools all over the South East exhibit more than 140 projects at Waterford Institute of Technology and put their knowledge of science to the test. [email protected] is one of the many initiatives run by Calmast, Waterford IT’s STEM Outreach centre, which is now funded by SFI as the STEM Outreach Hub for the South East. The centre works with schools, industry and the public to promote STEM to all. In 2017, the centre brought over 20,000 people to STEM activities in Waterford and the South East, in addition to running Maths Week Ireland nationally, with 300,000 participants.

[email protected] co-ordinator Cordula Weiss said: “We are delighted to have so many students from across the South East competing here in Waterford IT at Scifest. The enthusiasm and ingenuity the students are showing for science is wonderful. In addition to the many national awards, we are delighted that so many companies in the region have generously sponsored special awards for the students from the South East.

It was a full day celebrating STEM in the Southeast which began with Minister John Halligan opening the event. “It is wonderful to see so many students from the South East engaged with STEM. Scifest is a wonderful initiative allowing students to explore areas of STEM and come up with solutions to real life problems. This is closely interlinked to the Government’s aim of promoting and increasing interest in science, technology, engineering and mathematics. I am delighted to see expert judges from so many of the STEM industries we have in the South East here today.” Minister Halligan added “This is a great example of the Waterford Institute of Technology putting its expertise and resources at the service of education in the region. I am aware that this is one of many high impact events coordinated by WIT’s Calmast outreach centre which is funded by Science Foundation Ireland as the STEM Outreach Hub for the South East.”

Commenting on the [email protected] regional STEM fair Sheila Porter, SciFest CEO said: “2017 was the tenth anniversary for SciFest and a hugely successful year with another big increase in the number of students taking part. In total 10,000 students exhibited their projects in local and regional STEM fairs across the country. We are sure that 2018 will be another successful year. SciFest gives students an excellent opportunity to develop their interest in STEM and inquiry-based approaches to learning, while developing their creative and problem-solving skills and learning to work in a team.”

Stephanie O Neill from Science Foundation Ireland chaired the SMART futures programme in which Dr Aisling Masterson, Eirgen Pharma and Will Gough , GSK spoke to students about their careers in the local STEM industry.

The winning project by Conn Caomhánach and Con Ó Meachair looked at the effect of EM probiotics, will now represent the South East in the National Scifest final.

There were many awards given out on the day. A number of special awards for [email protected] were supported by local Pharma and Healthcare companies. The Life Science Project award sponsored by GSK was won by Caoimhin O'Leary from Ardscoil na Mara school with their project on Potential for Crocus Sativus biotechnological growth in Ireland.

Bausch and Lomb was presented by Pamela Mackey to Aine Kavanagh and Niamh Gallagher from Mercy Secondary School Waterford . The Award for Innovation in methodology supported by Sanofi, and was presented by Majella Moynihan to Kyle Treacy, Jules Casey and Conor McGoldrick from Ard Scoil na Mara TRamore.

Testing the effectiveness of market batteries against our Ecological Houseplant Battery

Why fidget spinners are more than toys: does stereotypy aid concentration in students with developmental disorders?

Power of the Sea

Could Mars have sustained life while at one point in history

Does dancing improve your memory and coordination?

From Wonder Women to Daddy Pig: an investigation of the sexist conditioning of children through TV and film

The secret to cleaning your gum shield in less than a minute, Grab and Go!

Does carrying a schoolbag effect your height?

Sanofi Award for Innovation in Methodology

A Study of The Community Implications of Anaerobic Digesters

How accurate are the best before dates on milk?

The impact of zero grazing on soil nutrients levels. 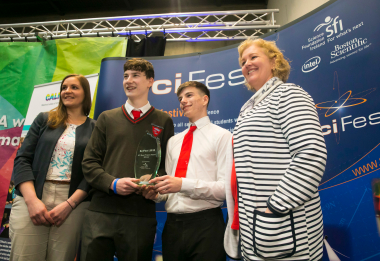 Of the over 140 projects exhibited at [email protected] 2018, the top prize on the day went to Conn Caomhánach, Con Ó Meachair from Meanscoil Gharman, Enniscorthy for their project, [Ag Fiosrú na hEifeachtaí de Phrobhitheacha E.M.(An investigation into the effect of E.M. Probiotics)