Sensors to give inside track on Irish Roundabouts

Sensors that can detect cyclists on roundabouts and alert motorists to their presence have been developed by researchers at Waterford Institute of Technology (WIT) and trialled in the city in recent weeks.

“We use the technology to identify the position, direction and speed of cyclists on roundabouts,” said Steven Davy, researcher at the Telecommunications Software and Systems Group (TSSG) at WIT. “(The System) allows motorists to be quickly informed about approaching cyclists and where they are on the roundabout.”

In 2014, two cyclists were fatally injured on Irish roundabouts, the majority of which do not have cycle lanes. Even on those roundabouts where cycle lanes do exist, cyclists are encouraged to leave the road and share a footpath with pedestrians.

The danger to cyclists using roundabouts is confirmed by the Road Safety Authority (RSA). “Crash data shows that the majority of cycling causalities occur in our towns and cities, specifically at junctions and roundabouts,” said Brian Farrell of the RSA.

“Drivers need to be aware of the fact that cyclists are just as entitled to road space as they are, and they need to be on the lookout for cyclists at these locations”

The TSSG technology can help make motorists aware of the presence of cyclists and to take appropriate precautions before they enter or leave the roundabout.

The first trials of the technology took place at the TSSG Carriginore Campus, where sensors successfully identified cyclists approaching from different directions and at various speeds.

The researchers hope to roll out the technology around Ireland by 2016 if they are successful in finding funding to back the technology. They are also planning to carry out further testing in Dungarvan, Co. Waterford.

The town was chosen in consultation with Waterford city and county council because Dungarvan is considering a bicycle friendly town with many new cycle routes and several roundabouts.

It is also part of the Go Dungarvan Smarter Travel Initiative. The researchers want to incorporate the technology into roundabouts signage; ensuring motorists are given important safety messages with as little distraction as possible.

In the future, messages could be tailored to individual drivers, depending on their location on a roundabout.

Davy said that as in-car communications systems become standard, it may be possible to communicate directly with individual drivers, through audio or images on screens built into dashboards.

“For now we are focusing on signage, as it can reach a wide number of motorists,” he said. “However, as in-car communications systems become more prevalent, we can seek to extend the technology” 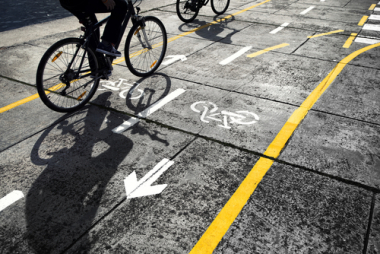