A talented, emerging group of filmmakers from the Higher Diploma in Television and Media Production at South East Technological University and Nemeton TV feature in this year’s Fastnet Film Festival. These exciting new documentaries and dramas have a chance to reach new audiences at this acclaimed festival in Schull.

Cian Cusack, a native of Waterford and an accomplished musician wrote, directed and produced this thought provoking documentary. The documentary titled Amharclann na nDaoine focuses on “The Theatre Royal” in Waterford and the impact and effects that the Covid 19 Pandemic had on both the workers and the management there. After working in the theatre for many years, the topic of theatre always interested Cian. When the Coronavirus Pandemic struck, a brand new conversation opened up about its impact on musicians.

Gearóid McNamara is a teacher and skilled Irish Traditional musician from Tulla, County Clare. His documentary Boscadóir centres around three young accordion players from Munsterand the music that they have learned. It compares them to the accordion players that have gone before them such as Joe Cooley and Paddy O’Brien.

Director Martina Flavin and Editor Ciarán Foley won the Údaras na Gaeltachta Award for Best Irish Language Production for Capaill agus Caráiste. Martina Falvin who decided to do the course to refresh her Irish Language skills and fluency. She has a keen interest in radio and is the director and visionary behind the documentary. The film is about the sport of carriage driving and focuses on a masterful carriage driver Paddy, featuring some lovely archival material. ‘The interaction between horse and man is very powerful and I wanted to show this connection in my documentary,’ said Martina.

Seán Dowd, an aspiring editor, is the director of the documentary Siondróm Sonas. Seán enjoys the editing and post-production side of film production the best. He created this documentary about a topic very close to his heart and was inspired by his 13 year old brother with Down Syndrome. In his documentary Seán wants to show how much his younger brother has changed and touched the lives of all the members of his family for the better and how life would not be the same without him.

Established Irish Actor Eoin Geoghegan is making his directorial debut with the drama “An Dreapadoir”, which he wrote, directed and starred in. Eatablished producer Maíre Dineen worked with him. Eoin says “I was always fascinated by the production side of films and after 20 years of acting I decided this year was the perfect year to pursue this interest”. An Dréapadoir is a dark comedy about how a man survives when stripped to his bare necessities, a gripping funny film that isn't your quintessential dark comedy.

In her short drama Comhlint Chroí writer and director Fiona Ní Chiadhra from County Meath explores the dilemmas of online dating. University student Ríona (played by brilliant newcomer Meg Ní Riain) is juggling work and study when a past online encounter comes back to haunt her.

The Postgraduate Course in Television & Media Production is run by the SETU in association Nemeton TV, one of Ireland’s leading production companies, and Udarás na Gaeltachta.  This course is widely regarded as the most industry-focused course in the media sector. The core belief is that our third level course is relevant, dynamic and genuinely prepares students for industry. The course has gained a high profile in the media industry and has an excellent employment record among course graduates.  Films produced on the course are broadcast on TG4, screened at festivals around Ireland and have been winning the Best Irish Language Film at the National Student Media Awards every year since 2014. 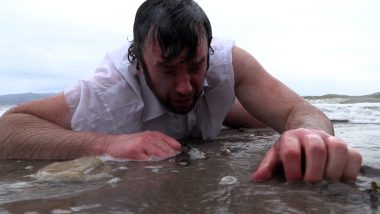