Two VistaMilk researchers from South East Technological University (SETU) were recently commended for their presentations at the VistaMilk Internal Conference 2022. Daniel Martins, Walton Institute, and Hao Shi, Nutrition Research Centre Ireland (NRCI), presented their work as part of the two-day conference which took place on 9 and 10 May.

The VistaMilk SFI Research Centre which is co-funded by SFI and the Department of Agriculture, Food and the Marine (DAFM), aims to be an agent of growth for the Irish dairy industry by being a world leader in fundamental and translational research for precision pasture-based dairying.

The VistaMilk Internal Conference is an annual event where researchers funded by the VistaMilk SFI Research Centre have the opportunity to share the results of their research with their peers including PhD students, postdoctorates, principle investigators, and site managers. This year’s conference featured seven minute and three minute presentations from 88 speakers, covering topics such as spectroscopy, databases, grass, omics, breeding, and health.

Over 135 people were in attendance, including 13 representatives from SETU. On the final day, six awards were given to the best presentations during the course of the event, of which two were awarded to SETU researchers Daniel Martins and Hao Shi, marking a great achievement and recognition of the work carried out by SETU within VistaMilk.

Head of Research at SETU Waterford, Dr Geraldine Canny stated, “SETU’s involvement in research centres such as VistaMilk is important as this leads to increased collaborations and productivity in strategically important areas.  I’m delighted that our young researchers were thus recognised and would like to congratulate Daniel Martins and Hao Shi.”

Commenting on the award Dr Deirdre Kilbane, Director of Research at Walton Institute said, “Congratulations to Walton researcher Daniel Martins. This fantastic achievement is a reflection of the excellent research carried out in collaboration with the SFI Research Centre VistaMilk.”

Hao Shi is a PhD candidate in the Macular Pigment Research Group at NRCI. In his presentation titled ‘The Development of Lutein-enriched Yoghurt to improve Human Health’ Hao Shi introduced the development of lutein-enriched yoghurt for human vision and cognition.

Speaking of the importance of this research, Prof John Nolan, Founder and Director of NRCI said, “This project represents a truly unique opportunity to build upon our previous works using dairy as a carrier for our targeted nutrients. We are delighted at the NRCI that Hao’s work has been recognised in this way and we thank our stakeholders IOSA Industrial Orgánica and The Heart Foundation UK for their continued support.”

Both researchers remarked that the event was an interesting opportunity to share experiences and create connections with researchers from other Research Partner Organisations, which will hopefully lead to new collaborations for SETU and VistaMilk in the future.

Creating Codes Using Bacterial Communications – Daniel Martins
In his research, Daniel Martins introduced the concept of channel coding using bacteria signalling. In typical communications systems channel coding techniques are used to protect the information exchanged among transmitters and receivers against unwanted effects (such as noise and interference) of the media where the information signal is propagated. These techniques ensure that the receivers are able to detect the correct information and no miscommunication happens. Inspired by these techniques, Daniel proposed the use of the molecular concentration produced by two bacterial populations to create codes that will protect the information signal exchanged among them. These codes could enable us to develop molecular communications systems that work for longer distances inside the body of animals and humans, as well as, in soil. To read Daniel's publication now visit: https://dl.acm.org/doi/10.1145/3485730.3494039

The Development of Lutein-enriched Yoghurt to improve Human Health – Hao Shi
Hao Shi introduced the development of lutein-enriched yoghurt in his research.  The consumption of lutein is essential for human vision and cognition. To contribute to the extra delivery of lutein to the population, Hao developed lutein-enriched yoghurt products with three different lutein formulations and investigated several flavour additives to improve the flavour of these products. It was found that yoghurt is a very effective carrier for lutein and the lutein extract emulsion (EE), a formulation already approved by European Food Safety Authority, has the best performance in terms of flavour among the three lutein formulations tested, making it an excellent ready-to-market ingredient for the preparation of lutein-enriched yoghurt. 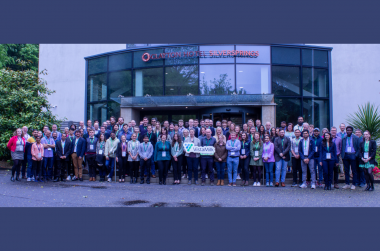