Daniel Hartigan, representing Waterford Institute of Technology, is a second year student of the BA(Hons) in Culinary Arts. The Dungarvan native has been awarded second place at this year’s KNORR Student Chef of the Year 2019, after an exciting two-hour cook-off at the Waterford IT campus.

Daniel went up against seven other young student chefs from across the island of Ireland to cook up a storm and create two plates. The theme of this year’s competition, ‘Street on a Plate: a street food feast inspired by the food trucks, street stalls and farmers markets of Ireland,’ celebrates the evolving palette of the Irish population and its influence on the Irish food market. Students are marked for their creativity and interpretation of the theme as well as the presentation of each dish, food waste management and allergen awareness.

Mexican food with an Irish twist

The inspiration for each dish came from his love for Mexican foods, particularly influenced by recent trips to Los Angeles and New York in the U.S. Daniel took well-known Mexican dishes like the jalapeño popper and the taco and used fresh, Irish produce to craft his own adaption of these plates.

Commenting on the experience Daniel said, “Participating in this year’s KNORR Student Chef of the Year competition has been a great opportunity to put the skills I’ve developed while studying at WIT to good use. I’ve really enjoyed the whole process and I’m, delighted to be taking home the silver prize.”

Speaking about the competition, Audrey Crone, Executive Chef Ireland at Unilever Food Solutions said, “This year marks my first KNORR Student Chef of the Year competition. The talent demonstrated by each student chef is a real testament to the training centres and institutes of Ireland and made quite an impression on the judging panel. Each competitor displayed great chefmanship and creativity in the preparation and cooking of each of their plates.

“The hospitality and food industry in Ireland is undergoing a time of upheaval with chef shortages. Today’s competition assured me that with the forthcoming training chefs, the industry is in good hands. It’s also an exciting time for graduating chefs to forage their professional careers,” she added. 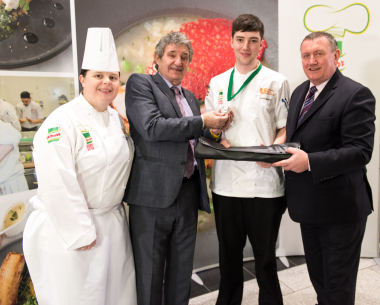 Pictured receiving his award is Daniel